Dear Mister Cee, Homosexuality is Not a Weakness

When famed DJ Mr. Cee, who reportedly discovered Biggie Smalls, was caught soliciting sex from a transgender undercover male police officer last May, he admitted to being addicted to strippers and prostitutes but denied being gay.

In a surprising turn of events after a video surfaced of Mr. Cee involved in a sexual tryst with yet another man, Mr. Cee resigned from his position as a DJ at Hot 97 despite management and co workers urging him not to.  He returned to work less than 24 hours later to face the music. During an emotional interview with one of Hot 97’s morning DJ’s, Mr. Cee broke down in tears as he wondered if he would be accepted and respected as a DJ and if this incident would impact his career and his ability to support his family. 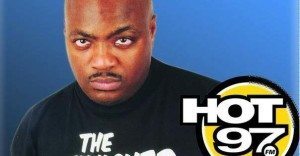 Mr. Cee’s shame and trepidation concerning his career being impacted by this incident has nothing to do with the crime of soliciting a prostitute and everything to do with his understanding that homosexuality is regarded as a weakness. His expectation of being shamed, disrespected and disregarded as a professional is a direct reflection of the fear that many homosexual, transgender and bisexual men and women have concerning the realization of their innate attractions and self image.

Although this has been a year of transformation for the LGBT community, the stigma surrounding homosexuality is slower to shift. Certain influences on our society, namely religion, have deemed homosexuality as immoral, distasteful and perverse despite its prevalence in every society and race since the beginning of humanity. There has been evidence of same sex relationships and unions since the days of Ancient Egypt.

It wasn’t until 1971 that Maryland became the first state in the US to ban same sex marriages and other states followed suit. Before then, there were no repercussions against legally recognizing homosexual relationships despite the sodomy laws that prohibited men from engaging in sexual acts with each other.

Despite these harsh laws and attitudes surrounding homosexuality, same sex attraction is not a new concept, nor is it one that will ever disappear.  According to the Kinsey Reports, a scathing study on the sexual proclivities of both men and women widely circulated in the early 1950’s, most people are not completely heterosexual or homosexual. The Kinsey Reports claim that sexuality is prone to change as an individual matures and sexual behavior can be gauged by both physical contact as well as psychological desire, attraction or fantasy.

If the Kinsey Reports, which were derived from anonymous interviews with more than 6,000 people, are accurate, this means that at some point during their development nearly every person will have an attraction or sexual encounter with someone of the same sex, even if they refuse to recognize it.

Although certain religions created to impact the moral compass of humanity have instituted a barometer of right or wrong concerning sexual activities, the truth is being attracted to someone of the same sex is not a weakness or morally wrong. It’s an attraction. Attraction is something that you can not control. Your body reacts naturally to certain stimuli whether you want it to or not.

Disregarding or denying this attraction based on gender is a learned behavior facilitated by your authority figures to give you a sense of a guideline for your life. It is their intention to help you move forward by setting life milestones and goals for you to follow so that you will be able to gauge your life achievement. The fact that someone, somewhere, decided that homosexuality did not fit into their idea of how you should progress in life does not mean their definition of life satisfaction must be accepted forever. Just because they deemed homosexuality as “immoral” does not mean that you must live your life by their rules.

In these modern times there is absolutely nothing weak about being homosexual. To embrace your true attraction in an era where doing so will cause you to be ostracized, bullied and even abused takes a certain amount of strength that so many will never realize.

Being a homosexual, transgender or bi sexual person openly without shame is akin to being a warrior on the front lines in a battle. These individuals wear a target for abuse and discrimination by openly embracing their natural attraction knowing that the reaction of the common man who is following the instituted ideals will be one of disgust and retribution.

Homosexuality is not a weakness. You can’t be a weak person and be a homosexual when the very sense of the word goes against the grain of societal expectations. Expressing homosexual feelings conveys a deep seeded connection to the root of human nature and the true mission of our existence which denotes a genderless, colorless society where love and affection are celebrated on every level.

Once we evolve into a society where love and attraction is not limited by gender, the shackles of shame will melt away and people will be released to be who they are, lowering the crime rates caused by self hating individuals who act out irrationally because they can’t express themselves emotionally or sexually.

Imagine how many men like Mr. Cee will be free to express their love and attraction for other men without having to commit a crime to distance themselves from their attraction. Imagine how many others will grow up willing and able to love who they see in the mirror without having to heal from childhood wounds where they learned that what they naturally feel is a “bad” thing.

A man loving a man is not a bad thing. A woman loving a woman is not a bad thing. Love is never a bad thing. Sex is neither shameful nor constricted by gender. Sex feels great or it should if you are doing it right. If it feels good and no one is being hurt during the process, keep doing it. Enjoy consensual sex with whomever you please and understand that your preference has nothing to do with being weak or strong, it’s simply you being- you. And who you are, is perfectly okay. What you like is perfectly okay.

To learn more about this writer visit her blog.