Did You Know Hannibal of Carthage was Black?

Hannibal Barca (247 B.C. – 183/181 B.C.) is considered by many to be one of the greatest military leaders of antiquity. His exploits as a young commander of the Carthaginian army gained him legendary fame by his people and fear and hatred by their enemy, Rome. But what is not often recognized was that he was an African as well.

The site of ancient city of Carthage lies in what is now Tunisia in northern Africa. The city was founded in 813 B.C. and soon became one of the “richest of Mediterranean cities in the third century, taking in millions of dollars a year.” However, the growth and expansion of the Carthaginian Empire eventually would lead to conflict with another growing Mediterranean power, Rome.

Open warfare erupted between the two powers during the First Punic War (264 – 241 B.C.) over the island of Sicily. Hannibal’s father, Hamilcar, was the leading Carthaginian commander at that time.

Carthage was eventually defeated. However, Hamilcar was “enraged at the humiliation heaved upon Carthage by Rome.” He vowed to avenge this loss and prepared an invasion of Europe. He first invaded present day Spain to establish a base to continue his eventual march to Rome and brought with him his three sons: Hannibal, Hasdrubal, and Mago.

Hamilcar died before continuing his dream to avenge Carthage. His son-in-law briefly commanded the army when, upon his assassination, the 28 year old Hannibal was elected commander of the army in about 229 B.C. He was a charismatic and courageous commander. A brief historical description of him follows:

He could run or ride with the swiftest, hunt or fight with the bravest; he was “the first to enter the battle…and the last to abandon the field.” The veterans loved him because in his commanding presence and piercing eyes they saw their old leader returned to them in fresh youth; the recruits liked him because he wore no distinctive dress, never rested till he had provided for his army’s needs, and  shared with them all sufferings and gains.

Hannibal wasted little time and began his campaign against Rome which began the Second Punic War. 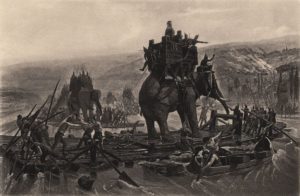 He led his army of soldiers, horses, and war elephants on an epic march across the Alps and into northern Italy. There he fought several battles against the Roman army and emerged victorious.

But his most impressive victory came in 216 B.C. at the Battle of Cannae. Here the Carthaginian army laid a trap for the pursuing Roman forces. The surprise was complete and by the end of the day of battle a reported 70,000 Roman soldiers were slain. The Roman army was almost completely destroyed.

Even with this great victory, Hannibal was unable to capitalize on this to bring Rome to its knees. He was forced to retreat back to Carthage and was defeated at the Battle of Zama in 202 B.C.

Although, he survived the battle, Hannibal was eventually forced into exile and died sometime between 183 to 181 B.C.