J. Cole Has The First Hip Hop Album In 25 Years To Go Platinum Without Any Guest Appearances

I’m not a big fan of hip hop these days, but this young brother J. Cole gives me some hope. Not because his beats are tight and many of his lyrics are meaningful on a variety of levels, but the brother backs up his verbal love for the black community by using his platform to speak to larger issues impacting us all.

This is a rare quality in hip hop over the last 25 years and one that should be celebrated. Not all of our entertainers, hip hop stars are taking the money and willing to sell out any and everyone on their way to the bank. Some actually care about the people that help them get rich by buying their albums, merchandise and attending their concerts. 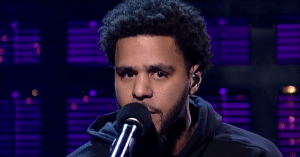 However, this article is about something else entirely.

J. Cole’s most current album 2014 Forrest Hill Drive is the first album to go platinum in 25 years without any guest appearances, no features, no one but him. Just J, some hot beats and the fire he brings to the mic.

This is quite a feat in the modern era because everyone from the critically hyped Kendrick Lamar to Lil Wayne and many others have song after song and single after single full of featured artist gracing the record with them. There isn’t anything wrong with this, but in this era it makes J. Cole’s accomplishment even that much more impressive.

What is surprising is this is J. Cole’s first platinum album ever. After putting out a few fire album’s under the Roc Nation label, one would have thought he has already gone platinum, but he hadn’t until this point.

What is surprising is this is J. Cole’s first platinum album ever. After putting out a few fire album’s

However, his newest album was released with little fan fare, hype or publication. Mainly his base of loyal fans purchased the album and made him the first hip hop artist to go platinum purely on their own talent. The last person to do this was in 1989, which seems to be Vanilla Ice’s To The Extreme.

Very impressive, but what is really excited about J. Cole’s future is he is a conscious hip hop star in touch with the community and is officially finished with his obligation to Columbia Records. Not sure exactly how this deal was struck between Roc Nation and Columbia, but he mentions being finished with this obligation and him looking forward to really producing the type of music he longs to produce.

Maybe this means we will see a return to conscious hip hop of the 90s when these influential musical beings actually poured life into our youngsters.

Hey, a brother can dream, right?

SOUND OFF: What do you think of J. Cole’s accomplishment? And is he better than Kendrick Lamar?