Why collective responsibility could fix everything!

NOTE: Our Black History Month 80% Trivia sale is still on for a LIMITED TIME, grab your bundle deal for $10 HERE.

I want to talk about something extremely important for the Black community, especially in the American context but also applicable to the global issues faced.

I’ll start off with a story, this happened in another country and another culture but it speaks volumes about collective attitude and responsibility.

He grabbed her by the throat and pinned her to the seat…. I immediately lept up and pulled them apart at which point he turned around and swung at me….

The city in this story is a beautiful city, it is generally a safe city with little crime or violence, I would say the people here have a reputation of being melancholy, negative and pessimistic but it is still a fun place!

On this particular night, I was having a lot of fun tasting a variety of dark rum. I admit I was mildly drunk!

At about 1 am I made my way to the night tram back towards the apartment.

It was busy, many others like me had clearly been enjoying their evening. A couple boarded and it was immediately apparent that something was wrong.

Things started to get a bit tenser….

Suddenly the guy grabbed the woman’s throat and pinned her to the seat, I immediately lept up and pulled the guy off her. He turned around, swung a fist at me, which caught my glasses, and then he and the woman ran off the open doors of the tram. The tram pulled away….

I was left, glasses-less, in shock and pumped with adrenaline. I looked around. No one helped me pick up my glasses, no one said anything, they all looked away or at the ground.

I had to pick up my glasses myself, no one said a single word. They looked away as I looked around.

I approached a member of staff (there were at least 5 staff members on the tram) who had witnessed the entire incident and asked him to call the cops. He told me to go away.

I asked a few young people for help with the local language to explain in detail why he needed to call the cops and how it was his job and duty to help me. All replied a variation of “no, nothing will happen, that’s just the culture here”.

We were at the last stop, my stop and I tried to take a photograph of the worker’s badge so I could identify him. He grabbed me by the throat and pushed me off the tram.

I did nothing! Why? Because I know if I had touched him even with a bad word 5 cop cars would have been there within seconds and he would be crying that I attacked him… AND no one would back me up! There was nothing I could do and still, no one gave a darn about what they just saw. No one did anything.

I didn’t sleep that night, in the morning I went straight to the official transport office to try and file a complaint.

Do you know what the official told me there? He said that this is just way this place is, this is the culture, people have to look after themselves and it is better they keep themselves to themselves. He even said that most of the people on the night tram are scum (and he mentioned from what district of the city which is heavily populated by Roma people), drunks, homeless! He spouted more border-line racism and made-up misinformed opinions about how the world was against the hard-working people in this country!

He said I should have just gone home with my pride and not tried to get the worker to help me and that anyway, the woman chose to be in a bad relationship so that was her problem.

I was gobsmacked at the “official” response! I asked but why won’t people help each other, won’t that make society better? He said maybe but it just is not the way it is.

This went on, he fed me more bull about “culture”,  essentially telling me to go home and mind my business.

I looked around at people sniggering under their breaths and looking at the floor when I tried to meet their eyes…. They were laughing that a woman got attacked, laughing that I was attacked!

I looked around, I raised my voice and I shouted, and I apologize for the expletive, “If any of this is true, you are all F**KED!”.

As I walked out, a man stopped me to tell me he had been waiting for ages and I had taken too long…. 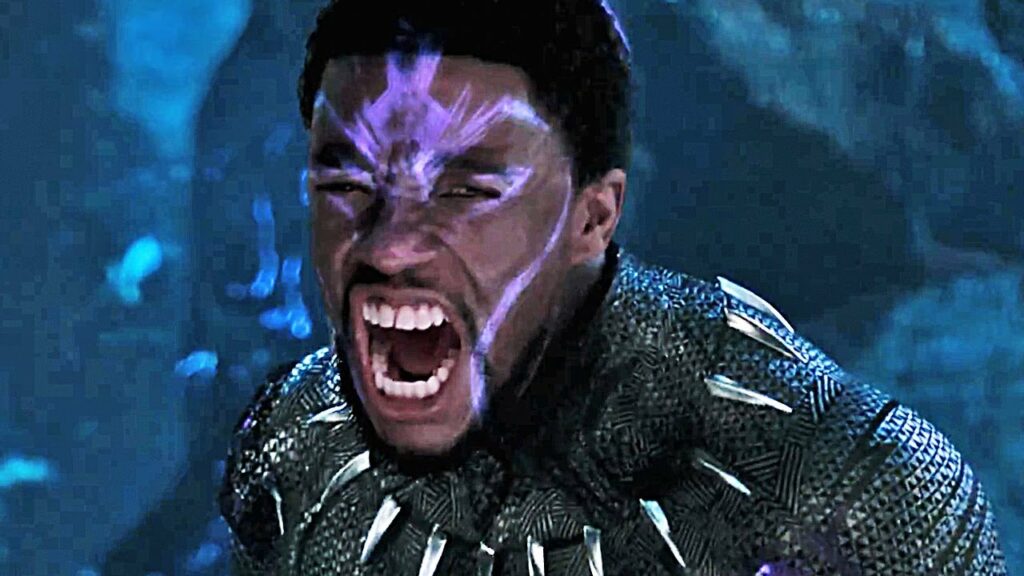 Collective responsibility and the Black community

The story above disturbs me a lot. Not because I was attacked or because of the poor customer service. The issue is in the fact that if the cultural claims have any basis (and even if they don’t but that’s just how people individually feel) you can’t feel like you can rely on your fellow community to have your back.

A woman was attacked, in public, and people did nothing.

I imagine each day she is probably beaten, I imagine she thinks, “what can I do anyway?”

I imagine, each day she would grow more bitter, more helpless, there is very likely no future for people like her, without any hope of getting out of a situation. She probably thinks that the relationship is just what people like her have to deal with.

Being Black in America is sometimes a bit like this. The larger society BOMBARDS the community with negative images. When Black people do try and get help to escape the negativity they are shut down, not helped by the outside world at large. Success comes with a LOT of hard work, a lot of fighting a world trying to beat you down.

YOU WERE SLAVES, YOU ARE DRUG DEALERS, DRUG ADDICTS, YOU ARE THIEFS, THE ONLY FUTURE FOR YOU IS PLAYING FOOTBALL, SINGING ABOUT HOES, OR FINDING A RICH BABY DADDY.

We CANNOT change the narrative overnight, we cannot easily fight the powers that push these images onto the community, so we got to do for self.

Now, I am NOT bashing the Black community, it is amazing how much people do for each other, how people stand up and go out on a limb for each other.

But we got to do more, we NEED to be our own rocks, we need to help people to stand up on the shoulders of our ancestors and our true history, to know who we really are, to reject the lies that are fed to us.

Imagine if you could walk down the street knowing every member of your community was there to pick you up should it be needed. How would that make you feel? How would you feel knowing you were helping too, that you could hold your head high and know that you do the right thing when needed?

The boost in confidence alone would increase performance, creativity, health, economic stability and happiness in the community.

The community is EVERYTHING, we need each other, so be the change, honor the ancestors and forge the future as a collective.

Our Black History Month 80% Trivia sale is still on for a LIMITED TIME, grab your bundle deal for $10 HERE. 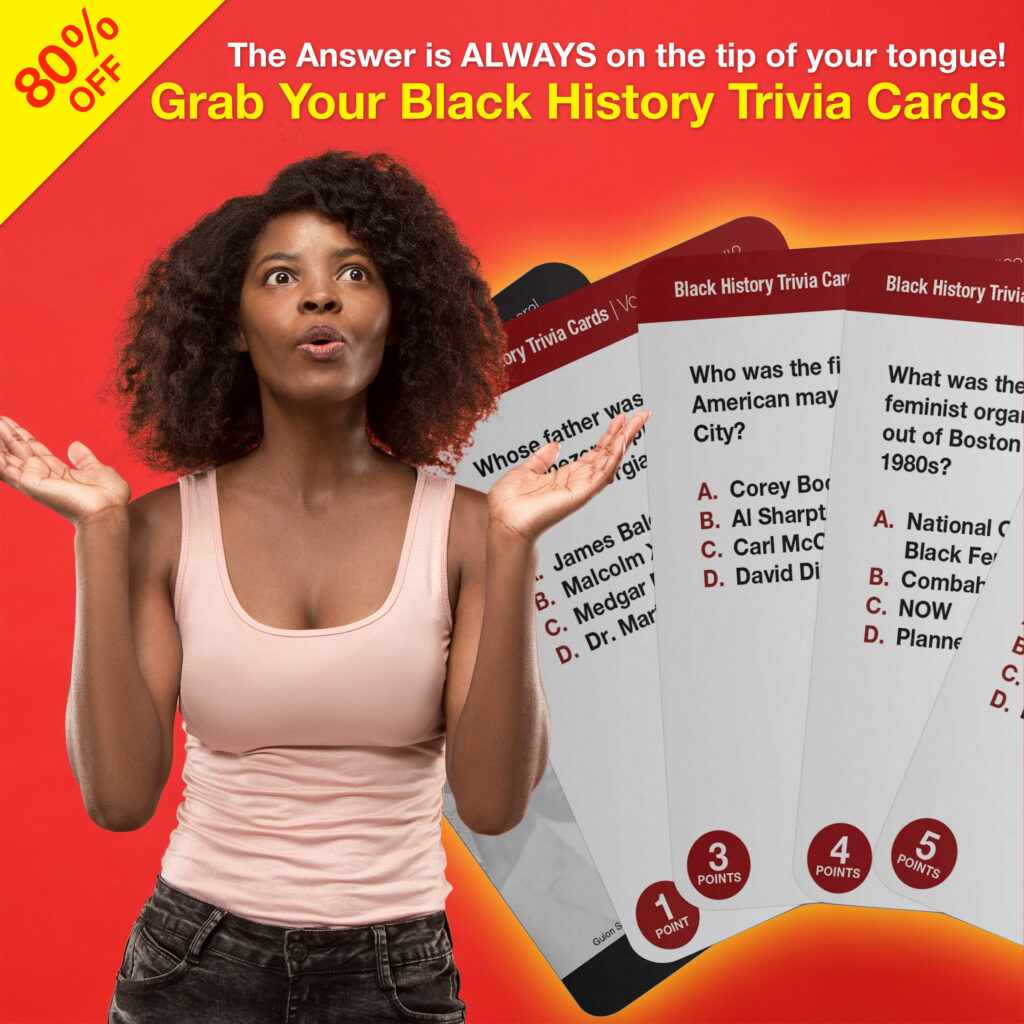