Recently, the VH1 show “Sorority Sisters” was cancelled, which was very good news. Those who don’t stand for something will fall [or get flushed] for anything.

A ruckus was raised about this bottom-feeding low-classed Black-hypocritical show that ended in the suspension of two members of the historic group, the Alpha Kappa Alphas.

Of course, they have every right to suspend members according to their code of ethics and moral responsibility, so now comes the time when the Final Three are being broadcast on VH1 before the show ends once and for all, hopefully.

1 All of those filthmongering racist misogynistic reality shows should have been cancelled a long time ago, but the rest of them haven’t heard enough of a hoot’n’holler in the Community about the way lower income Black people tend to pick up white people’s mental sludge and roll in it looking for brain food and something smelly and creepy to rub all over themselves.

“Like pigs slopping and sloshing around in mud, these are the days of their lives.” … or so Hollywood says they live like that anyway. They throw their mental leftovers in our yards in a plastic trash bag, and instead of throwing it back to them, we pick it up and go digging through it looking for ‘whatever-have-you.’ This is the only way we’d have had a Black Soap Opera anyway.

If the cheapened Black folks ’round the way’ who are “repped” in those shows aren’t raising hell about it, why should anyone else? Sure, it’s classist and elitist not to raise hell about all of it; but if they like it, then the “Rich Boyz of Hollywood” love it. If they didn’t want it; it, too, would be OFF THE TELEVISION — and all “upper class” African Americans have is a responsibility to EDUCATE them about why it’s wrong for all of us.

2 Sororities, especially the Black ones, are time-honored traditions in America.

They once carried prestige and social honor, so if you joined one, you were proud to put it on your resume, if you were applying for work with a Black employer. Racism dictates that you leave it off your white employment application because they only ‘accommodate’ Black people (so-called African Americans) in the white corporate and small business workplace because the law says they have to.

3 When you, as a People, take white folks psychological fecal material and allow them to PAY you low-ball WalMart change to smear it all over yourself and then wonder why they are calling our dark people “shitskins,” wonder no more. The only thing these shows represent is white people’s own sexual appetites and violent fetishes about us, so why are we patronizing any of it?

Even the “Preachers of Hollywood” lowered Black ministers down to their LCD: Lowest Common Denominator, and killed off all respect and prestige that they used to have. If that’s what represents them on television, then now is a good time to become a Black atheist.

But of course, white people love this gerrymandering “cherry-picking” between us.

It only proves what they, and what Sony, and what everyone else who is in charge of the money and the jobs in this country say about Black people behind Board Meeting closed doors: “We’re all a bunch of greedy whores…” who are easily sold out to the highest bidder.

Hold up before you start throwing stones at ME, I’m just the messenger. This is what SONY said about some of their contracted out TOP A-LIST BLACK CELEBRITIES, and it’s what they think of all of us, to tell the truth. Except for maybe Idris Elba, a Black Britishman – and even he was racially smattered in their social media, because they think James Bond is real, too.

Why did Zuckerberg’s “he will never have to beg for a two-cent corporate job for the rest of his life’s” BILLIONAIRE butt care about NOT HAVING HIS PERSONAL LIFE IN COLLEGE PORTRAYED IN THIS MOVIE? Read his answer: RIGHT HERE.

Now when you finally do go looking for that “BIG WHITE SHMANCY FANCY CORPORATE JOB” that you want so badly instead of the responsibility of OWNERSHIP and REINVENTING a scalable and viable social network in the Black community, the STUFF you did before makes a hell of a difference as to how you are viewed and perceived by your corporate Massas. Side Note: And they still only let you off work to see your kinfolk for their annual “white Christmases,” as it is programmed into their “good nature and will” to do so. It’s how the plantation always worked, why stop now?

Those drunken drug-sniffing party girl slut-sleeping “episodes” in college when you were wild and crazy like a white girl in a ho-tel in Washington, DC?

You don’t want that shit all over television and your name in the news attached to it. And you most assuredly don’t want your twerking behind clapping all over WSHH and YouTube, because it will be an office ‘joke’ for years to come. It will likely get you driven off that job before you get settled behind your desk good, and the white chick who was “slutting it up” in college with you? She’ll be right there to take your place as soon as you leave. Guaranteed.

THIS IS THE REAL WORLD, Jill. Keep it 100: You might not even want anyone to know that you are a proud member of the AKA or the Delta’s, or any other Black sorority, after that televised mess.

4 White folks who don’t know who Marion Morrison was, think Heathcliff & Claire Huxtable were a real couple, actually think John Wayne and Matt Dillon existed, that James Bond and “Annie” are real, and that there was such a place as Mayberry, NC, and who also actually believe that Dr. Phil is a real mental health professional (he is a television junk psychiatrist) can’t POSSIBLY draw a line of distinction between you and your real life, or your reality as a Black American. These types even take Dr. Phil’s word as “psycho-gospel,” when psychologists and mental health professionals who practice in the real world say he is a clueless quack. BUT “he’s on TV and that makes it right.”

Those who talk “hypocrisy” are forgetting one thing: THIS ISN’T ALL ABOUT YOU AND YOUR CLIQUE-OFF FRIENDS who “like to watch” and play the white folks’ ni&&er hunger games when it comes to voyeurism.

This is about Black American history and the thousands of others who have come before you, and the thousands who will hopefully come after you. They did not design the sororities to be another white man’s “ho show,” period.

CHOOSE ye this day whom you will serve…them, or your future?

Here’s a Clue, and  Trade Secret Hint that I will give away for free: Buy a business for its solid reputation and profit-loss statements, not because it “looks like a fun thing to do.” You owe me one.

5 This kind of media exposure only underscores everything white supremacists and their communal rappers and crappers have ALWAYS said about ‘niggers and their no-account bitches’, so now The Sorority is no longer something to be proud of.

Instead, it has you holding your head down and never mentioning your “accomplishments” because the real noise is being made by those blinged out by TV. It is coming from those who own you, not from you.

What you gonna do about it if they are paying you to shut up and feed them what they want?

That’s why you see the kind of illified mess on TV that you keep watching and paying to see. Who’s waiting for a brick wall to fall on their heads to get the message?

For the most part, they failed to stop him for the past 60 years or so, because they had no “ought” against him; and now –maybe because we watch wwaaayyy too much reality TV and not enough of the REAL WORLD – it seems to be working. 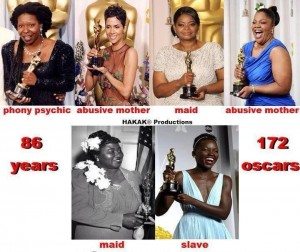 The same folks who will only award Black women when they are playing roles as “magic Negroes,” slaves, maids, and loud-mouth abusers, who will not reward the same Black women for SELMA or The Autobiography of Malcolm X or King or even Black women who become fictional ROYALTY in movies like “Coming to America” ‘because there are no white heroes‘, and who will, simultaneously, tell you to “stick out your ass and buck your teeth” for white people because it pays THEM big time to make you think you are being enriched by them…[there’s work at the Post Office.]

Put it this way, when you go broke and you’re out there looking for that corporate job that a white girl can get no matter what she does wrong, you’ll understand. I myself have been stereotyped in the work world because of the behavior of OTHER BLACK WOMEN that had nothing to do with me.

Maybe you will wait for that to happen before you decide to figure this out. In the meantime, as far as the Hollywood Shuffle goes, “everything you own in a box to the left.” 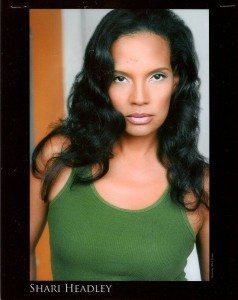 Hollywood does NOT reward, even in fiction life. Shari Headley “Princess to the Royal Throne of Zamunda”

Black people are too easily bought and sold by these white hedonist Hollywoodites, so it’s all hypocritical of all Black people period — Sorority Sisters and all the rest of it.

Why are any of us watching any of these white folks mental defecation and misfeasance on TV?

It’s pure hypocrisy on the part of your Black ancestors AND your Black legacy in America, PERIOD.

Those who do this kind of thing, those Black people who allow them to misrepresent what is yours and buy you off to do it, will sell your mamas, your dogs, your children, and your “Aunt Duckie” off to the highest bidder.

It’s all hypocritical because it only underscores how it is that our African ancestors ended up in slavery in America in the FIRST place.

Oh yes, many of these slaves were kidnapped from their families against their will, and some kings were put to death for refusing to sell their people; but many many of them were SOLD OUT and SOLD OFF by other Africans in exchange for, according to the ship and cargo maritime records that have been preserved in the national archives and historical records over the years, for “beads and cocoa.”

6 Black America can’t even get justice in the court systems in this nation because our most EDUCATED AND BRIGHTEST COLLEGIATE CITIZENS are so busy ‘out shopping’ and showing their literal kkk-stamped, glitter-bombed, neo-Nazi-branded @sses on TV that nobody is minding the community’s business at home.

Too many of us pander to and dry-hump the same types who actually believe the social sludge that they watch on television and movies. We USED TO be better than this. But keep playing with them; and keep trying to love a cobra that still has its fangs and has not been de-toxinated.

They will have your buck-dancing, teeth-shining-in-the-dark, butt-twerking @ss exactly where they want you in a minute: Six of one, half a dozen of the other.

‘Even in the greatest confusion, there is an open channel into the soul.‘
Daniel 12:4
“But you, O Daniel, close up and seal the words of the scroll until the time of the end. Many will go here and there to increase knowledge.“
PLEASE SCROLL DOWN AND LEAVE A COMMENT