Pro·hi·bi·tion – is the illegality of the manufacturing, storage, transportation, sale, possession, and consumption of thing, or a period of time during which such illegality is enforced.

First Alcohol prohibition now, Marijuana Prohibition. The 18th Amendment to the United States Constitution, the supreme law of the land, was the law that declared it illegal. However, the Volstead Act created exceptions for medicinal and religious uses, sounds familiar to me. During the times of prohibition, Rumrunners and Bootleggers were looked at as “Gangsters” and “Criminals”, while Drug Stores like Walgreens were free to sell alcohol because they categorized it as Medicine which allowed them to sell it to patients who had prescriptions from their physician. 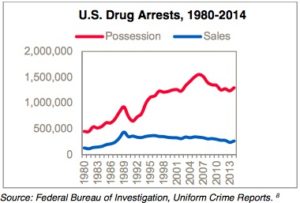 Today there is Marijuana Prohibition in the United States. Many African American families have been imprisoned because of marijuana prohibition and are targeted by the government through the so called “War on Drugs,” which entire goal was the Mass Incarceration of African Americans. Today’s “Drug Dealers” are yesteryears’ Rumrunners and Bootleggers. Knowing this begs one to ask “Should America End Marijuana Prohibition?” I mean how fair is it for Entrepreneurs  to be punished with imprisonment while Pharmaceutical Companies, Big Businesses, and Wall Street are free to operate as a Dispensary, Sell Stock, and profit off of Marijuana?

“50% of people in federal prisons are incarcerated for drug violations”

So now that the cat is out the bag, I know a few people are going to try to play “Jedi Mind tricks” on you with buzz words. The goal of the media through the use of Buzz words is to make you take your EYES OFF THE BALL! For example we protest against police brutality and they combat it with what about Black on Black Crime? Black Lives Matter but dont All Lives Matter? Dont Drink the Kool-Aid.  Be prepared for a Flury of reasons as to why it should be illegal but pay attention to the Man behind the curtain (Pharmaceutical Companies, Wall Street, and Distilleries) When they create a business to sell marijuana its called a Dispensary but when we do it, we are drug dealers operating a criminal enterprise. I say that these people arent drug dealers, they are Entrepreneurs!