You constantly hear the horror stories of professional athletes going broke after they are finished playing. Former NBA, NFL, MLB and NHL stars finances dry up at a pretty alarming rate during retirement because they are use to spending and earning at a certain level.

However, during retirement, things must change or going broke is inevitable. Just look to the ESPN 30 for 30 documentary “Broke” for a laundry list of examples where people were making millions of dollars a year only to squander it during retirement.

One individual who will not be experiencing the pain of going broke because they squandered the fortune made during their professional career is David Robionson. The two time NBA champion and San Antonio Spurs legend was viewed as being intelligent, diligent, pragmatic and talented on the court. 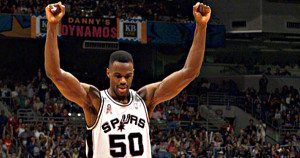 Well, these attributes seemed to have followed him into retirement and entrepreneurship as “The Admiral” ventured into the world of private-equity funds.

From Celebrity Net Worth: It’s true that 60% of athletes go broke within five years of retiring, but there are certainly exceptions, too. Guys like Hall of Famer David Robinson, who made good money during their playing days and then kept making money off the court. Robinson, nicknamed “The Admiral” because of his graduation from The Naval Academy, currently has a net worth of $70 million, and is doing so well since his retirement that he just opened up a second private-equity fund.

David has now smashed that $70m: See his updated net worth here: David Robinson Net Worth: He Certainly Ain’t Close To Broke!

In 2007, Robinson founded Admiral Capital, which focuses on real estate. It raised about $115 million and acquired $350 million worth of assets. In addition, it’s received $50 million from the United Services Automobile Association and $15 million from the Teacher Retirement System of Texas.

Initially investing in 11 original investments, Admiral Capital has sold seven of them, netting investors’ 24% more than what they contributed. Building on that success, Admiral Capital Real Estate Fund 2 has received $50 million in investments, and is targeting $175 million. Robinson has partnered with a former Goldman Sachs investment banker to launch both funds.

Robinson’s story and success in the investment field during retirement is one that should be spread far and wide. Not only to the young professional athletes trying to ensure they don’t go broke after retiring from their sport, but to everyone who is concerned about retirement.

Making intelligent decisions with your money is critical to your future and family. Don’t drop the ball and go broke like so many struggling Americans do during retirement. This goes for professional athletes and blue collar workers.Hats off to you Mr. Robinson for being a shining example of excellence during your career and during retirement.