The Empress Candace Of Ethiopia, 332 BC, Who Humiliated Alexander The Greek!

Candace or Kandake was the name given to any Queen or Empress of Ethiopia by the Europeans, and these great woman were seen to be wives of the Gods or the living God!

Candace of 332 BC has a particular story that still should stand tall today. Despite the lack of knowledge of these Queens this legend made it’s way out.

Her actual name was said to be Amanirenas. She was blind in one eye due to losing it in a battle with the Romans. She was known to be a fierce, tactical and uniting leader.

Alexander the Great had reached Kemet (Ancient Egypt) and was gearing up to battle into Ethiopia. Alexander never fought Candace though and there are a few accounts as to why.

Tengaged rounded up these two accounts:

The wildly accepted view one given by Chancellor Williams who wrote ” The Destruction of Black Civilzation” is that upon hearing Alexander the great coming Empress Candace, or Amanirenas, gathered her black troops, lined them up across the first cataract along with herself and stood on top of two African Elephants on a throne and waited for Alexander to show up. Alexander the “great”, didn’t want to chance a loss and give up his undefeated winning streak. He definitely didn’t want to lose it to a woman so once seeing the black Queen on her Elephants and her black armies along with her, Alexander the “great” halted his armies at the first cataract, and turned back up into Egypt. Once he saw the deadly military tactician in all her glory and her black army with the latest iron weapons, he decided against an invasion and turned around.

The other view offered by William Leo Hansberry says that Alexander met semi-privately with Candace. Legend has it that Candace advised Alexander to leave the region immediately and if he refused, after defeating his army, she would cut off his head and roll it down a hill. You use your imagination and pick which one happened! 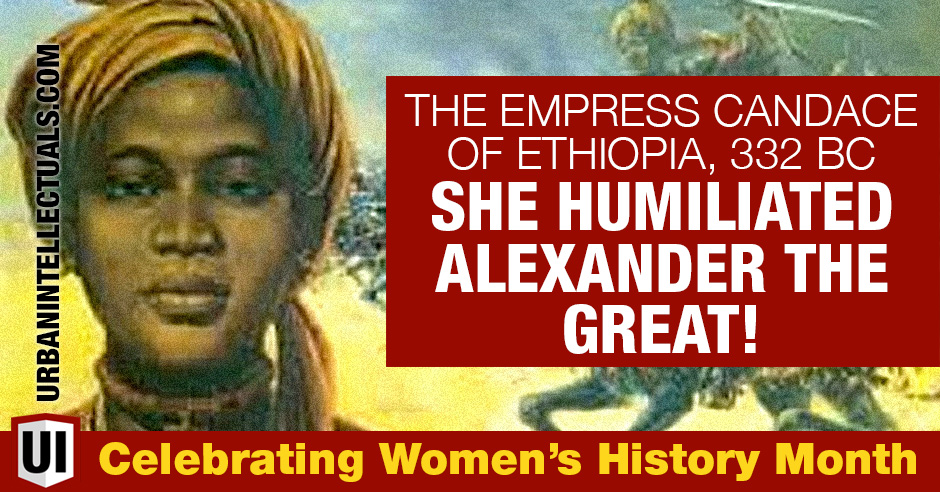