Ralph J. Bunche, born on August 7, 1904 in Detroit, Michigan, and was raised by his grandparents due to the deaths of his parents.

However, the difficulties in Ralph’s childhood did not stop him from succeeding in school, becoming the valedictorian both in high school at South Central Los Angeles and in College at the University of California in Los Angeles, where he studied Social Science.[1]

He furthered his education by getting his Ph.D. in Political Science, which also made him the first African American to gain this degree from an American University. 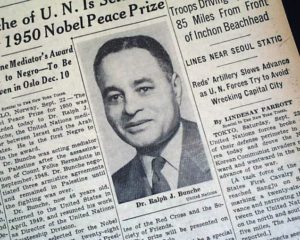 These successes would follow him later in life when he became the first African American Nobel Peace Prize winner on December 10, 1950.  Bunche was awarded the Nobel Peace Prize for his role in negotiating a ceasefire between Israelis and Palestinians in 1948-1949.

This path started in 1946 when Bunche joined the UN service, a year later being sent to the Middle East to help create a plan where Palestine would be divided between the Arabs and Jews.[2]

Before Ralph Bunche got on board for the peace negotiation, Folke Bernadotte, the UN negotiator before Bunche was murdered by Jewish extremists in 1948, making Bunche take Bernadotte’s place.  It took Bunche a year before he was able to succeed in bringing about cease-fire, with the 1949 Armistice Agreements .[3] 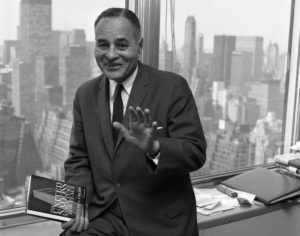 The need for peace followed Ralph Bunche beyond the 1949 Armistice Agreements.

In his acceptance speech for the Nobel Peace Prize, Bunche stated, “May there be freedom, equality and brotherhood among all men. May there be morality in the relations among nations.

May there be, in our time, at long last, a world at peace in which we, the people, may for once begin to make full use of the great good that is in us.”[4]  Ralph J. Bunche died on December 9, 1971 in New York City.

1 thought on “Did You Know Ralph J. Bunche Was the First Black Nobel Peace Prize Winner?”