Avid readers of Urban Intellectuals may remember our first article about Manuel Godoy’s innovative video game demo, released last summer, entitled Black Sands: Legends of Kemet. The game would be the first of its kind, setting the record straight for a history that has been rewritten continuously to cast the African civilization of Kemet as ruled and inhabited by Europeans.

We interviewed Godoy recently to update fans on developments regarding the project. To our excitement, a new concept has since emerged and garnered the attention and support of fans across the web. Check out the interview and information below to learn about the new and highly anticipated animated series Kids 2 Kings, featuring young kings and queens of Kemet showcasing their power. Also, click the link below to visit Kids to Kings’ Kickstarter profile and to follow the official Instagram page!

UI: We last spoke extensively about Black Sands in July of 2016. What new things have developed since?

Manuel: We successfully created a demo for Black Sands, Legends of Kemet. After we hit that milestone, we shut down Legends of Kemet because the cost of production was too steep and the time it would take to finish would have been too long.
Instead we put all our resources into Kids 2 Kings. It is a comic book series from the Black Sands universe but this time the content was less mature. We follow for your kids as they try to prove they have what it takes to rule Kemet.
We released the first issue on Madefire in February and recorded it for YouTube, which received high praise by fans and strangers alike. With that momentum behind us, we decided to go straight into Kickstarter to continue our production and quite possibly raise enough to create an animated pilot needed to pitch the series to Netflix. 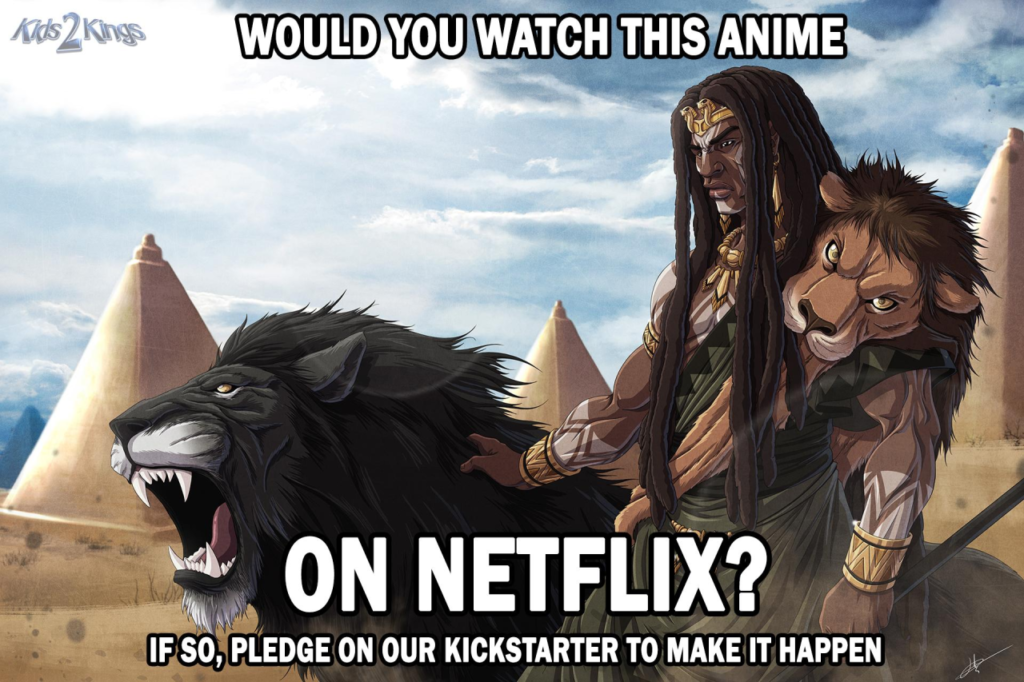 UI: The ‘Kids 2 Kings’ series is a great concept! One of the things that stood out to me in the first video is the character Seth and how his skin disorder leads to the discovery of his power. Is the disorder Vitiligo & how did you go about developing the character?

Manuel: It is a tad bit more aggressive then Vitiligo but it is definitely the condition. While it does not affect his health, he has had very bad experiences with the citizens in his kingdom because of his appearance. That scorn has left him with a huge chip on his shoulder but as he got older, he learned to ignore the perception of himself and instead focus on ruling.
I chose this appearance for Seth because I needed a NEW way of explaining why he was attributed to disease, famine, and plague while making him a likable character that is misunderstood. The reason I chose not to make him a villain so far was mainly because the actual Kemetic people did not believe he was a villain. Many Pharaohs named themselves after Seth and the popular belief today that he was the bad guy was a new kingdom idea and I don’t put too much weight in new kingdom ideas because they are heavily influenced by the Greeks.

UI: Do you think the kids series will empower black youth? Also, do you intend to adapt it into a video game as well? What developments do you have in the works going forward?

Manuel: This not only empowers youth, but the parents of said youth as well. It’s one thing to have a T’Challa but that is nothing like having something that is your culture. We don’t simply make black heroes for the hell of it. They are black because history tells us this. This is their distant history. As the people of Caucasian decent all claim either Greece, Rome, or Norse, we must be able to claim our great nations with no doubt It is us.
I made all the characters extremely diverse so that every black child, man, and woman can take pride in the look and feel of these ancient cultures. I also implemented strong defenses against racist viewers who would be quick to troll the movement by adding white and Arabic nations into the storyline. With their inclusion, anyone who tries to claim Egyptians are white will look like a complete jerk because they already have great nations in the story and are just trying to be greedy now.
As far as the future goes, our first task is pushing out a few more issues. After we do this, we will try to get an animated pilot out and try to land a deal for an anime series. Next year we will make a card game, and 2019 will be the year of “First Strike.” I will keep that ambiguous for now.

UI: When can we expect the game to release?

Manuel: We currently have no intentions of continuing production on Legends of Kemet in the immediate future. The demo is available though for those that wish to check it out.

UI: We got an array of different opinions after releasing the first interview with you last year, most of which were positive. However, there were some folks who stated that Black Sands’ imagery of Egyptian people as black is not historically accurate. What do you have to say about this claim?

Manuel: Well what I say to that is “Why do Egyptians share cultural customs with all their southern neighbors, going as far as central Africa but share absolutely no customs with Semetic of Caucasian cultures to the North and East?” The reason is simple. They were not related to anyone in the North or East. To prove this, one needn’t look any further then the entire middle east where there were many nations yet almost all of them shared the same exact customs.
Also, the timeframe I picked has significance. The time period in the story is 3500 BCE. At this time, international trade was a joke. There was no mixing of races yet because technology wasn’t that advanced to support mass migration. I do not argue that Egyptians during 500 BCE might be mixed. I really don’t care either. The time period that matters, they were black.

UI: Where can we contribute to the crowdfunding? Also tell us where to reach you for feedback and updates?

You can visit our Kickstarter by following this link:

Be sure to watch the first issue of Kids 2 Kings at the top of the campaign page if you are new to us. For any questions or updates for and from me, make sure to follow my Instagram and DM any concerns you may have.