You’ve probably seen that Neo-Nazi, White Supremacists and ALT-Right (yes, all the same brand of hate) groups have been hailing New Balance shoes as their shoe, their representative brand! But how did this come to be and should all of us not in line with these ideals be boycotting the American made brand now?

Let us take a look at how we got here!

For any brand, being aligned with a group citing hateful ideology isn’t going to be favorable in the long run, however, in this case, New Balance may be somewhat to blame for their adoption by the Neo-Nazi dumb fu*ks. 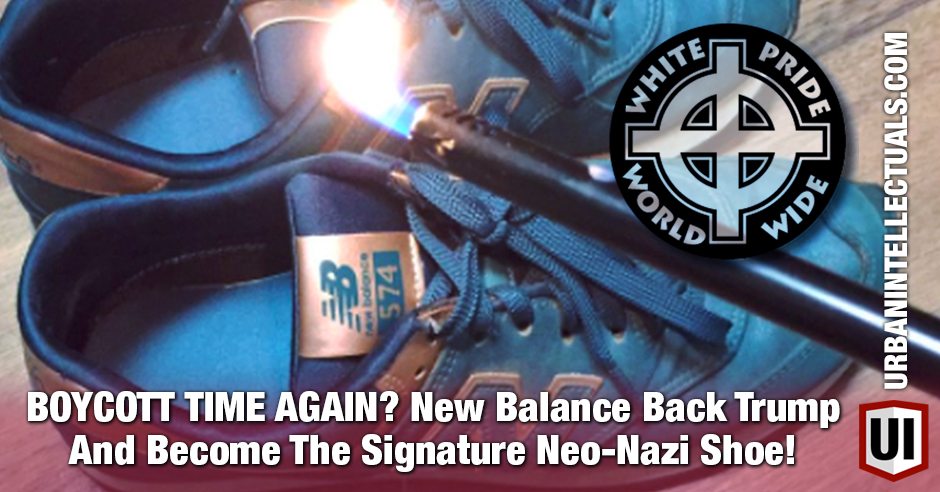 Trump in simplistic terms want to block a Chinese trade deal, the Trans-Pacific Partnership bill that Obama has been pushing for, or at least he says he does but who knows what he really means. This theoretically means that American made product can once again reign supreme on the market. New Balance is one of the few American made sneakers.

So, New Balance don’t like this bill much, no company likes competition, so their anti-bill stance can mildly be understood.

Sara Germano
@germanotes
New Balance: “The Obama admin turned a deaf ear to us & frankly w/ Pres-Elect Trump we feel things are going to move in the right direction”

No matter how you read that, the New Balance spokesperson mentioned Trump, that was enough for the Neo-Nazi groups starting to declare that New Balance’s shoe was pro-Trump, enough for it to become instantly part of standard uniform for the pseudo-army.

These comments were supposedly only in context to do with the bill, blocking cheaper Chinese imports, but that fact didn’t matter, the wave had begun.

New Balance released a new statement saying that they are “values-driven organization and culture that believes in humanity, integrity, community and mutual respect for people around the world.” and tried to distance themselves from the so-called endorsement but the damage was done.

So the question is, is this boycott time?

It’s difficuly. NB are an American made brand, a rarity. Supporting homegrown business is supposedly good. However, they are also a corporation, one that sympathy should be spared with.

Someone in PR didn’t fully look at the implications of what they were saying, that was very very stupid, knowing the climate out there.

The trade bill has it’s issues, bring stuff thousands of miles and supposedly at the expense of American jobs is something we all have to consider. However, trade with China brings affordable goods for the poor.

Let’s face it, the poor can’t afford New Balance anyway! So, should we give a damn? The people who work with them may lose their jobs if the factory shuts down but seriously, how well do they treat their workers? Do they really care about Americans, are they even employing Americans? Do they employ blacks in a respectful way? I’m not answering any of these questions here, just saying they need to be looked into.

There is a problem, corporations run the show, we shouldn’t be siding with New Balance anymore than Nike. Shouldn’t we be saying, to hell with these big brands anyway? What about a local shoe startup? A black-owned and operated business.

Yes we should boycott New Balance, I think, but not because of their dumb PR mistake. BUT because they are a mega-corp and we gotta hurt them to push the country forward.

Mashable has some more details on this mess.