Never let it be said that Black Americans have been a community of people who have been on the front lines of the cheerleading squad for homosexuality, but when a man was and is as much of an overwhelming and phenomenal talent such as the likes of Elton John and/or George Michael, it’s time out for the BS.

The absolute truth is that this guy Michael, who left us on this Christmas Day at a mere 53 years of age, was an overriding talent, as well as some kinda eye candy … leaving in his wake a lot of broken-hearted women of all races who certainly wished many a night that he was not gay.

He has moved on over into the still silent night of eternity; and when one lady said how much this year has sucked — especially with this being the last Holiday Season at the White House that any of us will actually enjoy — she wanted to know why this sucky kind of a year decided to suck up George Michael on its way out. I answered “Maybe he just got tired of us.” I think they all got tired of us at some point.

It began last New Year’s Eve with the death of Natalie Cole and Mr. Death has been heartlessly relentless ever since, even wrenching from us and depriving our souls and the world of the extraordinary sheer talent and beauty that was and is Prince Rogers Nelson, the ALL-American musical icon of all time.

The music world is losing one after the other and no true talent has come along in decades that would build on the foundation and legacy that was laid before us. Its all bells and whistles now and nothing substantial or even new in the music world, be it copycat artistry or rappers carrying on as the biggest snitches of all time and mostly doing a WHOLE lot of screaming and mouthing off about nothing worth listening to or caring about. 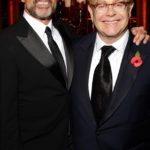 Michael was phenomenal 80s genre, outstanding 90s genre and then came on into the New Millennia, still riding the waves of a 30-PLUS year old career that left tears in people’s eyes, a song in man’s heart, and plenty of women stone cold heartbroken over the fact that he wasn’t a straight kind of a fella.

Nevertheless … One More Try and Father Figure and Careless Whisper were just three of the Top 10 for me when it came to Michael.

He was significant in the music industry, a rare talent, and that is a piece of his history on Earth that should never be forgotten. Ever.