Barbershops, The Black Man’s Country Club, In LA Get $8.5 Million Grant To Do Good In The Neighborhood

Barbershops in our community are often referred to as the Black Man’s Country Club. We frequent these establishments almost weekly spending a few minutes in the chair, but enjoy hours of soaking up wonderful conversations about current events, relationships, politics, and of course we enjoy a bit of joking with one another as well.

However, barbershops in LA are about to undergo a radical metamorphosis thanks to Dr. Ronald G. Victor, the head of the Cedars-Sinai’s hypertension center. They will use a $8.5 million grant to train black barbers in the city to check men for high blood pressure or hypertension. 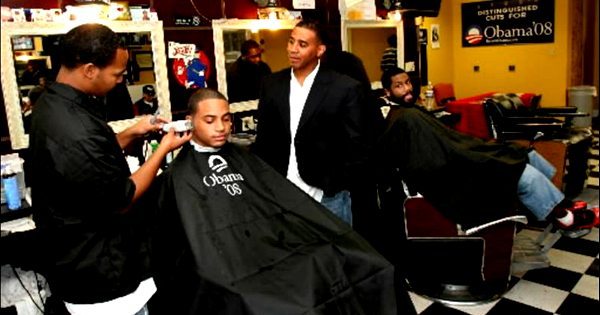 “Uncontrolled hypertension is one of the biggest health problems facing the African-American community today,” said Victor, the Burns and Allen Chair in Cardiology Research. “Hypertension is called the silent killer because there are no symptoms. We need to find a way to reach out to the community and prevent the serious complications caused by high blood pressure because all too often, by the time a patient finds out they have the condition, the heart and kidneys already have been damaged.”

This is a groundbreaking initiative. One we hope will gain a nationwide audience to take advantage of the fact that black men frequent the barbershop at a much higher rate than a medical facility. This should, hopefully, increase the awareness of those with hypertension to the issue, but also all men to the dangers of hypertension and causes.

Here is the official statement from Cedars-Sinai.

A Cedars-Sinai Heart Institute physician has been awarded an $8.5 million grant aimed at enlisting African-American barbers in the fight against hypertension, a deadly condition that can cause strokes, heart attacks and organ failure, and which is particularly devastating to African-American men.

Ronald G. Victor, MD, director of the Hypertension Center in the Cedars-Sinai Heart Institute, was the first to subject increasingly popular barbershop-based health programs to scientific scrutiny with randomized, controlled testing. His study, published in 2011 in the Archives of Internal Medicine, showed that if barbers offered blood pressure checks during men’s haircuts and encouraged patrons with hypertension to follow up with physicians, hundreds of lives could be saved annually.

Now, with the grant from the National Heart, Lung, and Blood Institute, Victor is about to start a new, randomized, controlled clinical trial that will include 500 African-American male patrons of 20 Los Angeles-area barbershops. All participants will have uncontrolled hypertension and be longtime customers of the participating barbershops. The goal of the new trial is to test the effectiveness of barbershop hypertension programs and whether expanding such programs is feasible and cost-effective.

The Cedars-Sinai-led research study will be conducted in partnership with several California medical centers.

We use information collected through cookies and similar technologies to improve your experience on our site, analyze how you use it, and for marketing purposes.
Barbershops, The Black Man’s Country Club, In LA Get $8.5 Million Grant To Do Good In The Neighborhood