It might be hard to believe, but slavery reparations was approved by the Dallas County Commissioners this week. In a unanimous vote, the resolution put forth by John Wiley Price was accepted by everyone on the board.

However, it turns out many of the commissioners were not actually paying close attention to the words of Mr. Price and didn’t realize they were voting for slavery reparations for the African Americans in this country.

Price stood before the Dallas Country Commissioners court meeting delivering a riveting speech on the hardships and inhumane treatment of African Americans in this country starting with slavery, but also extending through the Black Codes, Jim Crow and the prison industrial complex, which African Americans are disproportionately effected. 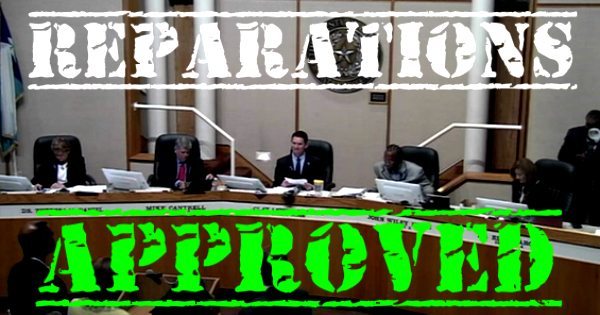 The speech garnered wide sympathy from the board members. Perfectly timed with the Juneteenth celebrations and titled as such, the resolution for slave reparations inserted at the very end where Price closed with:

“The United States of America is derelict in its promise of life, liberty and the pursuit of happiness to the African-American people. Be it further resolved that the dereliction that has caused 400 years of significant … suffering to the descendants of those who have been enslaved Africans who built this country, should be satisfied with monetary and substantial reparations to same.”

Apparently thinking the entire discussion was a further promotion of the Juneteeth celebration in the African American community, when Price stop speaking he was quickly greeted with a “Seconded” of the resolution and the other three members changed “aye”, which means yes or they agreed. The resolution for slavery reparations was passed.

It is noteworthy to mention, Price is the only African American on the Dallas Country Commissioners.

After the vote was recorded, word began to circulate they board had just passed a resolution supporting slavery reparations for African Americans. Commissioner Mike Cantrell regretted not actually paying attention and noted he doesn’t support slavery reparations, then changed his vote to “abstain”.

The other commissioners decided to keep their vote the same. The thinking is because these resolutions don’t carry much weight or teeth to actually be implemented. However, they do mark a great moral victory for those fighting the fight to see African Americans wronged by the United States involvement in the Slave trade and governmental support of slavery.

Price mentioned he was prompted to take this action after reading “The Case for Reparations” in The Atlantic. The article highlighted how many other groups have been paid by the United States for the pain and suffering inflicted on them, except the African American.

Many in the black community and others feel it is time for reparations if America is to every truly take the step of being a country that actually embodies the ideals of equality, freedom and opportunity for all.

We use information collected through cookies and similar technologies to improve your experience on our site, analyze how you use it, and for marketing purposes.
Approved: Slavery Reparations By Dallas County Commissioners