A Proper Black Media Sendoff to David Bowie: Rest with the Stars

Yeah, he was a British white guy who loved TOTALLY LOVED Black women. He may have even been the one who started the popular Facebook meme “Black women are for grown-ass men, not for little boys.”

Never let it be said that we Black Journos didn’t pay proper respects to one of very few white men in the industry who put his own career in harm’s way by demanding equal treatment for Black artists in everything from mainstream media to the record shelves. 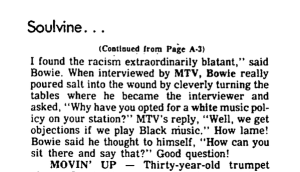 We still pretty much had records in the 1980s … they were just beginning to fade away. MTV wasn’t known for giving too much of a dang about Black music artists and Michael Jackson and Whitney Houston were two of the first they opened the doors to. My favorite ‘white boys’ back in the day were Bowie, Mick Jagger, Elton John, and “Wild Cherry.” {Play that funky music, white boy, LOL.} 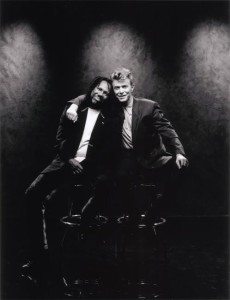 Nile Rodgers and David Bowie: A Musical Force with a Legacy in Black Music

Last night, the news wafted through the airways – kind of cool and sultry with a bit of a pouty-mouth much like David Bowie’s public persona – that he had passed away; and with his long-time cherished wife, Black model and bombshell beauty Iman, at his side.

The marriage between the superstar classic beauty and model and her superstar rock wild husband was one of those few high-profile Hollywood romances that just never lost luster, even more than 30 years and two children later. That is phenomenal for two so-very famous people who were already famous when they met, simply because Hollywood marriages rarely last that long. There are a hand full of exceptions to that, but ego alone typically knocks two very famous and rich people off their A-game when it comes to staying together. #willandjada

Iman tweeted [paraphrased]: “One never realizes how precious a moment is until it becomes a memory.” Shortly afterward, her controversial, tempestuous, and highly-storied husband left this world at the age of 69. Cause: Cancer.

Right now, every other news item is another tribute to Bowie, (surname “Jones”); and there’s not much left to say about him except what others have said already.

Yeah, he’s British. And white. One of very few of them in the music industry, national and international, that truly deserves a heartfelt salute from the Black community.

We use information collected through cookies and similar technologies to improve your experience on our site, analyze how you use it, and for marketing purposes.
A Proper Black Media Sendoff to David Bowie: Rest with the Stars