22 Year Old Twins, Born to a Single Mom, Both Graduate with Masters of Business Administration Together

There is no greater feeling in this world than having children of great accomplishment. As a parent, I only dream of our children doing what these fabulous young men have accomplished thus far in their brief 22 years on this planet.

At just 22 years old, Darion and Varion Walton graduated with their Masters of Business Administration from Sam Houston State University in Texas. Getting an MBA is impressive, but to accomplish it with your brother two years early is something else all together. 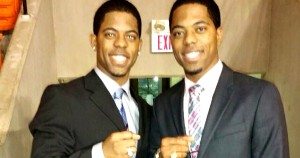 The twins, born to a single mother, graduated from high school focused, motivated and excited about their future. They enrolled at Navarro College taking 18 edit hours each per semester while working four jobs, according to the Corsicana Daily Sun. They worked as school ambassadors, resident advisers, interns at the student center and peer mentors.

“It was obvious when Darian and Varian first came to campus for their interview for the Opening Doors to Success scholarship that they were special,” said Dr. Tommy Stringer, former Navarro College instructor and administrator. “They had an immediate impact on campus life. Not only did they excel in the classroom, but they were among the most visible students on campus. They were not only members of multiple organizations but they held leadership positions in those groups.

After getting their undergraduate degrees, they moved on to Sam Houston State University to pursue their Master’s degree in business administration in August of 2014.

They attribute their success to staying focused, praying harder than anyone else and not giving in to peer influences. They mention there were many weekends they didn’t go out, opting to study instead.

Now they are finished with this portion of their collegiate education, the twins are going their separate ways for now, but plan to keep in touch and even work together. The Daily Sun reports they plan to write a book about overcoming and work on the development of their nonprofit organization, Walton Inspires.

Hats off to these young men, their mom, and the support system that helped them get to this point in their lives. They are an inspiration to us all.

Read the Corsicana Daily Sun for more on the story.