WTF: Get Your Confederate Flag License Plate In Georgia?

I have outrage fatigue when it comes to race relations in America. Let’s be honest. Every other week it is something else. Some one, organization, government department, politician or person does something to remind everyone black people still not equal in this country.

This week it is the brash honoring of the confederate south. If you recall, they advocated for slavery and succeeded from the Union to maintain slavery. They fought a war over it. The lost. And know the State of Georgia is approving a confederate flag license plate? 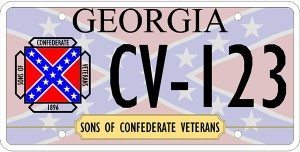 According to today’s loose interpretation of terrorist, the confederate south foot the bill…. 100%. However, not only are they not being disgraced in the history books, the State of Georgia is going to help honor them with a license plate. #MindBlowing

Spokesman Ray McBerry said the group meant no offense and views the plates as a way for people to honor their heritage.

“We believe that everyone has the right to preserve their heritage,” he said. “Southerners have as much right to be proud of their heritage as anybody else.”

“To display this is reprehensible,” Eaton said. “We don’t have license plates saying ‘Black Power.'”

Could you imagine a person or group going to ANY State capital submitting paperwork for a Black Panther license plate or the Universal Negro Improvement Association of March Garvey’s?

Either the people would laugh them out of the Capital or they would be locked up. And if you think I’m wrong, I dare you to try it? Look, you wouldn’t even consider such a thing.

Not only did this confederate loving group have the gumption to apply, IT WAS APPROVED!

I’m tripping that in 2014 the Government is still so blatant with their racism and bias. I know I shouldn’t be, but damn. The state of South Carolina is still flying the confederate flag on their capital building. Therefore, a license plate shouldn’t be any surprise to any one at all, but it is causing a stir in the black and liberal communities.

Of course, the Governor says he doesn’t know anything about it. Playing politics as expected. He can’t say he is against it because much of his voting block might be offended. And he can’t say he is for it because it would bring down the media and a negative public relations would ensue. Therefore, he is claiming ignorance.

Where do you stand?