Why Public Schools are the heart of our community

African Americans and the education system in this country have a history that is so intertwined that it can be said that we gave birth to the public school. In the post 1865 “Radical Reconstruction” era, newly freed African Americans had no place to go; they were recent slaves and that experience will limit ones’ humanity and ability to do for self. Recognizing this, the Northern liberals, the Union, and race leaders at the time convened to create what was called “The Freedmens Bureau.” This short lived organization allowed for the creation of “Freedmen’s Schools” where not just African Americans would be educated but all people. 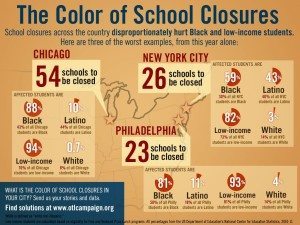 Education was such a crucial issue for African Americans that they would bend over backwards and do whatever it took to get their children a free and decent education. These schools stemmed from benevolent societies and churches. In effect, these schools became the nation’s first public schools and gave birth to a movement. Public schools were initially, as perceived by the African American community, as a locale for community and community advancement. All of the highly educated stayed in the poor rural areas to educate children and did not yet leave the community to seek education positions elsewhere, mainly because of racism and segregation. That was a double edged sword; it kept the best and brightest minds in the community, but it also limited their capacity to earn more and see the rest of the nation.

In the post-segregation era African American organic and public intellectuals were allowed to leave the community and go off to predominantly white colleges and institutions to be tokens and simultaneously fight racism from within the bastion of academic white supremacy. This was important, however it had a debilitating effect on our community. While these intellectuals went off the PWI’s the community was under attack from de facto Jim Crow and new sweeping waves of right wing fascist conservatism which sought to bring “law and order” which euphemistically meant putting African Americans back into chains. Think Ronald Reagan, Richard Nixon, and George W. Bush I. The war was being waged not only on our men, but our schools. Schools became synonymous with drop out factories, places where children went to have their imaginations killed and the mold of the status quo was forced upon them. In tandem with white flight, the under funding of public schools, many which were run by African Americans and served people of color, decimated the education system for years to come.

Today, the newest wave of so called “education reform” is done under the guise of justice and nice sounding terms like “closing the achievement gap” when in reality they are deepening the gap and are doing more damage than amelioration. To start, largely corporations are behind the new push for education reform. How do corporations get their wealth? They exploit two things: labor and resources. They exploit labor and make a handsome profit, some in the millions others in the  billions. They are typically required by law to pay 10 percent of their income, or more specifically for every 100,000$ they make. However, there is a loophole, which they themselves lobbied to create. The loophole is that if you create a foundation of some sort, think education, then you only have to pay 1 percent. So they go on these education ventures, creating organizations like Teach for America (highly problematic). But, how do these organizations find the space to move in when there are so many public schools? Well they lobbied to not pay their taxes so that erodes the tax base which funds would have went to public schools, so now they effectively destroy the public school as a central community organization. Hence, underfunded schools and the rapid closing of schools in these urban and poor communities. All the while investing in private prisons which will be used to house the “unteachables” aka black and brown men. I don’t have to elucidate on how this adversely affects our communities. Once corporations only pay 1 percent, they can use the other 9 for whatever they want; it typically goes to hiring white rookie teachers to come invade and gentrify the neighborhood posing as teachers and reformers. All the while unions are being systematically dismantled, schools are being divided over scarce resources that corporations rather than community members control, white gentrifiers are moving in and increasing the property value to the point that we can no longer afford to live there, and the charter schools they set up indoctrinate our children into the corporate mold and tell us to be grateful for their systematic raping of our school system.

Consequently we must come together, support our unions, have true dialogue with our community members in the school and outside, we must fight against racist organizations like Teach for America and their other corporate lackeys. Community control, not corporate control will save our children. Our oppressors will never give us the kind of education we need to overthrow them or even seek liberation and revolution. As the fathers and mothers of the public education system in this country it is up to us to save our schools from this education reform apocalypse and white supremacy under the guise of aid.