There was an intense run off in the Mayoral election in Atlanta, Georgia. The race became racially charged which prompted CBS News 46 in Atlanta to openly discuss these issues. The news team consists of black and white anchors who openly discussed how or if they thought race played a role in the election.

This open dialogue prompted a viewer to send Sharon Reed, the black female anchor on the show, a very nasty and hateful email which she read on air: 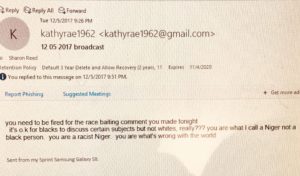 you need to be fired for the race baiting comment you made tonight, it’s o.k. for blacks to discuss certain subjects but not whites, really??? you are what I call a Niger not a black person. you are a racist Niger. you are what’s wrong with the world

Yes this is what the email said, word for word. And Reed did not fail to mention that while Kathy Rae was trying to insult her, the viewer couldn’t even properly spell the word that was intended to be an insult. Reed could have read this person her rights but she took the professional route.

I think when arguing with somebody you have to be careful not to mischaracterize their viewpoint. So I won’t mischaracterize your view either, Kathy Rae. I get it, on December 5th 2017 you think it’s okay to call this journalist a nigger. I don’t! But I could clap back and say a few things to you but instead I’ll let your words, Kathy Rae, speak for themselves. And that’ll be the last word.

Although professional, you can still hear don’t come for me unless I send for you echoing throughout her segment.

Alright Ms. Reed, we see you!

We use information collected through cookies and similar technologies to improve your experience on our site, analyze how you use it, and for marketing purposes.
The Clapback Heard Around the World: Black Female News Anchor Called a N*gger (Video)