Referred to as “The Black Napoleon,” by his associates, Toussaint L’Ouverture (1743-1802)
was a former slave who rose to become the leader of the only successful slave revolt in
modern history that created an independent state, the Haitian Revolution. Being highly
renowned, he was praised by many blacks, mulattoes and Europeans as he significantly
contributed to building the economy. Defying French Revolutionary laws, he facilitated the
return of emigrant planters, and he used military discipline organize his rebellion forces. Due to his views that people were inherently corrupt and vile, he used his military prowess and experience to compel freedmen to work to prevent “idleness”. However, the laborers were no longer treated like slaves as they were legally free and equal which meant they were able to share the profits of the restored plantations. Racial tensions were eased because Toussaint preached reconciliation and believed that blacks, a majority of whom were African born, had lessons to learn from Europeans and Europeanized mulattoes. 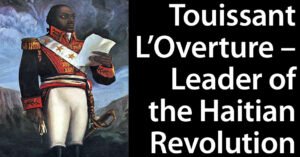 When Touissant was young, the French “Code Noir” which legalized harsh treatment of
slaves was legislation that represented despair and submission for the blacks, instead,
Touissant inspired kindness from those above him which was an anomaly. He was later
taught how to read and write with the help of Simon Baptiste and he gained vast knowledge from a personal library which belonged to Bayon de Libertad, the owner of the plantation Touissant was born on. He later put this vast knowledge to good use when he became a skilled horseman and learned about different natural medicines.
-- ADVERTISEMENT --

On Aug. 14, 1791, the Haitian Revolution began with the Bois Caïman ceremony, a popular
voodoo ceremony. The slaves met in the forest to create plans to burn down plantations and start an all-out rebellion. Touissant was part of this rebellion as he had grown tired of the generations of abuse committed by the white planters. The seeds were also inspired by
French Revolutionary ideology which preached liberty, equality, and fraternity. It is
interesting to note that before the revolution kicked into full swing, Touissant made sure to
secure safe passage for his wife and kids along with Bayon de Libertad. To do this, he put
them on a ship that was heading for the United States.

His reputation as a talented soldier took hold as he soon became military secretary for one of the leaders of the insurgency, Georges Biassou. From 1794- 1802, Touissant became the lead political and military leader in the French colony which was known as Saint Dominique at the time. Touissant experienced a meteoric rise in military authority and was given the title of General in Chief of the army against the British and later the Spanish who both came to conquer Haiti in the wake of the French defeat. They both failed at Touissant’s hands.Touissant had reached the pinnacle of his career when Saint Dominigue/Haiti became the first black independent state. At that time, he called himself the governor. However, his rise came to an end when in 1802 Charles Leclerc captured Touissant. Captured and imprisoned at Fort de Joux in France, Touissant L&#39;Ouverture died of pneumonia on April 7, 1803.