Minority businesses succeed in various cities in the world despite the many challenges placed in front of them. Entrepreneurs’ optimism and other initiatives and programs like Minority Chambers of Commerce (in the US) empower them. Their enterprises are great forces that shape the small business landscape in countries around the world. The
business climate, access to small business loans, and the “health” of the local economy are factors contributing to their thriving. The following are some of the top cities in the world for minority businesses:

Atlanta is ranked the top worldwide among the best cities for black families to live. There are black universities and a strong middle class thus giving rise to becoming a cultural capital. There is more access to funding, low startup costs, and more startups by new entrepreneurs in Atlanta than other cities. It has affordable living costs, well-funded startup resources, and many minorities in leadership positions.

Among the top cities for minority businesses, Houston is the best in the USA. It has a more diverse population which has reversed much racial bias; its residents work with or buy from enterprises owned by minorities. Houston’s world-class incubators, affordable living costs, and economic opportunities appeal to entrepreneurs and fosters a growth environment.

London and Birmingham in the UK

The UK is ranked sixth in the world for protecting minority investors. Earlier, research shows that, by 2008, UK government figures indicated there were about 300,000 minority-owned enterprises throughout the UK. 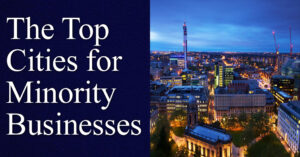 The research further indicates that ethnic minority businesses (EMB) in the UK are mostly located in England’s most deprived wards thus leading to economic regeneration and a slow transformation of the communities in the inner-city areas, more jobs, and overall financial contribution to the UK economy.

In addition, there are various strategic initiatives like Birmingham’s development of an EMB database and Business Link London’s Knowledge Centre for EMBs. Access to financing further enhances small business entrepreneurship.

Toronto has been declared the world’s most diverse city; it is ideal for minority entrepreneurs. Ontario Network of Entrepreneurs (ONE) was created by the government to support businesses.

Brampton and Markham are cities near Toronto where minorities are the majority; for example, they make up 78% of Markham’s population. The thriving pockets of businesses have been the notable cause of Markham’s rise. Canada enacted an official policy of multiculturalism in the 1970s which resulted in several majority-minority cities such as Markham and Brampton. The residents are from a variety of backgrounds including Asians, Afro-Caribbeans, and Europeans.

Cities will attract minority entrepreneurs if they have a thriving minority community, business friendliness, opportunities, and good quality of life. Many cities around the world have the optimal climate for such enterprises. Due to various policies, the top cities for minority businesses in different countries have empowered the entrepreneurs, and this has resulted in the entrepreneurs’ contribution to the countries’ economy.