Yes, you are reading it right.  Step this way, prisoners wanted to fill beds for America’s private prison system.  Let’s show a big round of applause to the great State of Ohio, for being the first to sell one of the five State ran lockup facilities.

In tandem with the prison budget shortage, Ohio’s prisons are over capacity, housing some 51,000 inmates in 31 prisons built to hold about 38,000. Estimates suggest the inmate population could rise to 54,000 in four years if nothing changes.

Speaking to the media on the recent CCA purchase agreement, State Policy Director, Shakrya Diaz had this to say. “These changes are nothing more than a Band-Aid for the deep-seated problems that continue to plague our state. Privatization does nothing to address it, and may actually make it worse by allowing companies to make a profit off imprisoning people.”

It would seem the Ohio government and it’s citizens have opted for short-term financial problem solving rather than tackle major hot button issues within our judicial system, otherwise known as the pipeline to prison.

All is not lost in the pursuit of financial solvency for the State of Ohio.  CCA may begin operating the Lake Erie facility in Conneaut on Dec. 31, pending the outcome of a lawsuit challenging the constitutionality of the move.  However, the plan is to forge forward with the Nashville, Tenn.- based CCA budget estimates to run the facility with a budget 8% lower than the State currently, generating  an estimated $3 million in future savings.

The general public should not make assumptions about what is the first priority of a for-profit business. Included in the 8% decrease in budget are expansion plans.  Yes, you guessed it. CCA plans to add 304 beds to the newly acquired facility and an estimated 400 new beds in facilities still under the State’s budget but operated by CCA.

Just like any other business an empty bed equates to missed or loss revenue.  So that the message is even more clear, no business could sustain itself with continual decreases in revenue, which in this case contradicts with the State’s plan to to reduce its prison population by putting fewer nonviolent offenders behind bars and giving judges more sentencing options.

It begs the question.  Are Ohioan’s getting the entire story?  Or, our politicians are awfully gullible.  Either way these beds can not stay empty. 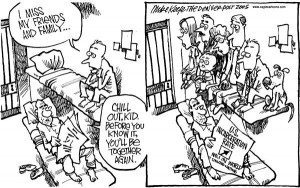