Ten Lesser Known Facts about Juneteenth Every Person Should Know

African-Americans in the United States recognize June 19th, 1865 as the dawn of freedom.
Juneteenth is a linguistic combination of the words “June” and “nineteenth”. It came into being two and a half years after President Abraham Lincoln signed the Emancipation Proclamation for two reasons. The first was to free all enslaved African-Americans in the south and second was to encourage (force) the formerly enslaved to join the war effort on the side of the Union against the Confederates.

The American Civil War raged from 1861–1865 and had two opposing sides-the Union and the Confederates. The Union referred to the United States of America forces. The other side referred to the Confederates a consortium of eleven southern states who wanted to separate into their own country in order to continue the practice of slavery which was the foundation of their economy. The Confederacy in order to further its objectives seceded from (separated itself) from the union in 1860 and 1861. 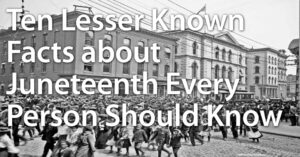 Ten Facts You Should Know About Juneteenth

1. The Enslaved wasn’t informed immediately of their emancipation
The Union confirmed that the historic June 19 announcement came two and a half years late from when Lincoln initially made the declaration. It has been confirmed that approximately 250,000 slaves in Texas remained uninformed about their freedom.

2. Poor enforcement of the Emancipation Law in Texas

Communication was not efficient. Over two months passed before Confederate soldiers learned of General Robert E. Lee’s surrender. Lee was the commander of the Confederate States Army. Texan slaveholders suppressed the news of the proclamation, which may explain part of the reason it took over 30-months from the proclamation announcement to for the enslaved to realize their freedom. One conspiracy theory that attempts to explain the gap is that the original messenger was murdered on the way to deliver the message. He was murdered to ensure the information didn’t reach its intended audience which meant the definitive end to the “southern way of life” forever.

3. Some Slaveholders delayed freeing their slaves

General Granger, a General of the Union army, ordered the immediate and broad spread of the message of freedom. However, this order wasn’t adhered to well by the enslavers. Most of them suppressed the news until they harvest time and even beyond.

4. The freed slaves were required to stay in their former stations

The executive order advocated for equality in personal rights and property rights between the enslaved and the slaveholders. Freedom was about a shift in relationship to the status of employer and hired labor. The enslaved would be working for their former masters and
obtaining compensation in the form of wages and the slaveholders did not want to pay and
didn’t.

5. Juneteenth has not achieved the status of a US federal holiday

6. The emergence of the “scatter”

The former enslaved were, of course, angry and did not want to continue living on plantations. Even before Granger could finish informing everyone of their new status, some were already on their way tracing and tracking lost relatives. A large number moved to the North to find a better life.

Texas slaveholders relied on slavery for their entire economy and the maintenance of their way of life. As a result of the law, they became extremely bitter about and reacted violently by beating, lynching and even murdering some of the enslaved during that period since they could do nothing legally.

8. Challenges popped up paralyzing the celebrations

Each time the freedmen attempted to celebrate their new freedom; “issues” would pop up.
These issues included problems finding public places to celebrate and the continued
enforcement of segregation in public gathering places.

9. Celebrations wouldn’t be held in commemoration for several decades

Despite their new found freedom, the lives of African-Americans were (and continue to be)
characterized by oppression. This factor weighed down their morale and stagnated their natural progression of life. Jim Crow laws advocated for continued racial prejudice in the Southern sections of the United States. African-Americans found it difficult celebrating during Jim Crow laws period because it was essentially a legal continuation of a slave state.

10. Texas became the number 1 state to recognize Juneteenth as a state holiday

Perhaps to make up for their early missteps around Juneteenth, Texas became the 1 st state to make Juneteenth holiday a state holiday in 1980 and continues to honor it today.