When Guinea demanded independence from French colonial rule in 1958, the French unleashed their fury with more than 3,000 leaving the country taking their entire property. In addition, they destroyed anything that couldn’t be taken – destroying schools, nurseries, public administration buildings, cars, books, medicine, research institute instruments, tractors were crushed and sabotaged, animals killed and food in warehouses were burned or poisoned. In effect they were sending a message to all other colonies that the consequences for rejecting France would be high.

These were words from a 2014 article by Mawuna Remarque Koutonin, peace activist and editor of SiliconAfrica.com.

The article went into details of exactly how France still colonises Africa through various arrangements thats see them take somewhere between $400-$500 per year from 14 nations held to their ransom.

These countries are forced into a colonial tax, a tax that is based on the idea that these countries, despite having independence, owe France for the benefits of France’s previous colonial rule.

Although this has been known for some time it’s just been dug up again by a German newspaper who are putting the yearly figure at $440 billion. 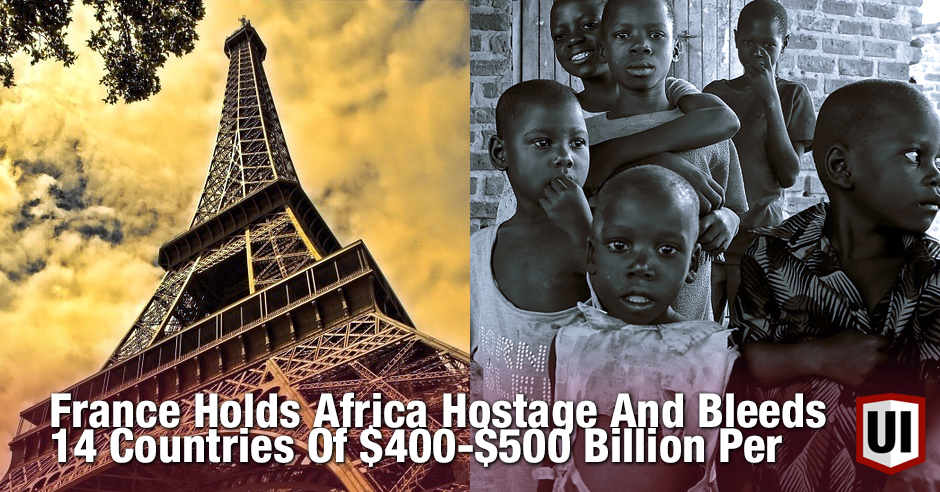 “The French government collects from its former colonies each year 440 billion euros of taxes. France relies on the revenues coming from Africa, not to sink into economic insignificance, warns the former president Jacques Chirac.

“In the 1950s and 60s, France decided the French colonies of Africa to become independent. Although the Paris government accepted formal declarations of independence, it called on African countries to sign a so-called “pact for the continuation of colonization.” They agreed to introduce the French colonial currency FCFA (“Franc for the French colonies in Africa”), to maintain the French schools and military system, and to establish French as an official language.

The CFA franc is the denomination of the common currency of 14 African countries members of the Franc zone. This currency, which constitutes a brake on the emergence of these countries, was created in 1945, when France ratified the Bretton Woods agreements and proceeded to implement its first declaration of parity to the International Monetary Fund (IMF) . This was called “Franc of the French Colonies of Africa”

These 14 countries are required to 85 per cent of their foreign exchange reserves at the Banque de France in Paris.

BUT, what happens if a country just flat out refuses to pay this tax?

Well, when Jean-Bedel Bokassa the first President of the Central African Republic was assassinated, it was reportedly on French orders, by exForeign legionnaire David Dacko. This was just one of 67 coups has occurred in 26 African countries, of which 16 are ex-French colonies. Many of these coups can be tracked back to French actions.

And on the economic side, when a country tries to Rebel, then France control so much of the assets they are literally held prisoner.

The original article is currently down right now but many of the details can be found here on GlobalResearch.ca.