Should African Americans (non-immigrants) get reparations?

Note: UI attached the phrase “non-immigrants” to the title. This descriptor cannot be attached to any other people.

That single word has the power to bring forth memories of slave screams, blood-shed, lynching, raping and the unrepentant theft of generations of successful Black families by the United States of America. 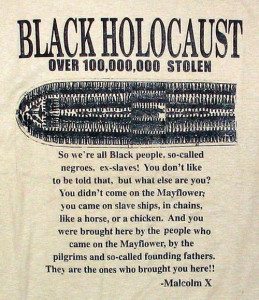 It also has the power to breed resentment, as the 40 acres and a mule that Black Americans were promised by General William Sherman at the close of the American Civil War were snatched away by President Andrew Johnson and returned to their White owners.

Primarily left landless, fragmented, disconnected from our culture, and uneducated with little-to-no chance of gainful employment, the dregs of slavery and Jim and Jane Crow continue to poison our communities in both tangible and intangible ways.

During her investigation into the wealth — or lack thereof — in the African-American community, CNN’s Soledad O’Brien spoke with Rev. DeForest B. Soaries of First Baptist Church in Lincoln, New Jersey, who made the sharp correlation that “debt is slavery”:

“When I’m paying last month’s bills with next month’s check, that’s slavery. When I ‘m writing a check hoping that it doesn’t bounce, or when I pull out my credit card praying that it’s not rejected, then I’m living in financial bondage.”

What becomes clear when the imbalanced economic scales in this country are tilted further by institutionalized racism, is that we are still very much living within a system that profited immensely from the blood, sweat, and tears of slave labor, while refusing to make good on the loan of our livelihoods and collective economic value. According to Harper’s magazine (November, 2000), the United States stole an estimated $100 trillion dollars for 222,505,049 hours of forced labor between 1619 and 1865 with a compounded interest of 6 percent.