Racial pay disparity exist at almost every level of American society. Trust and believe we all have to deal with it, overcome it, or allow it to eat us up from the inside out.

Serena Williams sat down to discuss the pay difference between herself and Maria Sharapova, who is white and has been dominated by Williams on the court. In fact, Williams has beat Sharapova 18 times out of 20 matches on the court. 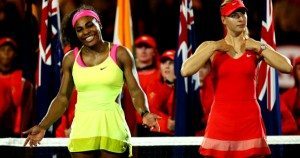 However, Sharapova earns a significantly higher amount of money off the tennis court in the form of endorsements when compared to Williams, the #1 tennis player in the world. Sharapova is currently ranked #3 in the world behind Serena and Simona Halep, but dwarfs them in endorsement deals and earnings.

In the last year, Sharapova earned $23 million in endorsement deals, which is very impressive. However, Serena, who is clearly a much better player, earned about half of this at $12 million dollars.

Even in estimated net worth, Sharapova has the nod on Williams. Sharapova’s net worth is estimated at $195 million dollars while Serena comes in at $145 million. Again, this is nothing to sneeze at but for a woman who is HEAD AND SHOULDERS better than her opponent, the numbers seem skewed….and we know why.

However, Serena is classy as ever in her response to Sharapova ranking higher on the Forbes’s list and earning more than her despite dominating her on the court:

If they want to market someone who is white and blond, that’s their choice. I have a lot of partners who are very happy to work with me. I can’t sit here and say I should be higher on the list because I have won more. I’m happy for her, because she worked hard, too. There is enough at the table for everyone. We have to be thankful, and we also have to be positive about it so the next black person can be No. 1 on that list. Maybe it was not meant to be me. Maybe it’s meant to be the next person to be amazing, and I’m just opening the door. Zina Garrison, Althea Gibson, Arthur Ashe and Venus opened so many doors for me. I’m just opening the next door for the next person.

Continue to be the trailblazer for young, black women around the world…on and off the court!