Marshawn Lynch is being attacked on social media for his refusal to play “nice” with reporters and the media. Reaction to the star running back for the Seattle Seahawks hatred for the media ranges from massive support, disappointment, to down right bigoted hatred.

Everywhere you go these days, there are many discussions on Lynch’s position and disdain of the media. However, there are a segment of people venturing to voice their displeasure with Lynch in the old, typical racist manner many of us are use to hearing from white people. 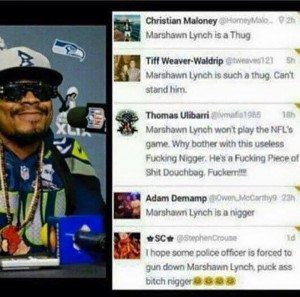 They are calling him the N-word in social media circles, but far more often the term “Thug” is being attached to Lynch as well. Thug seems to be the new N-word for modern racist to cloak their hatred for black people while seeming sensible and nonthreatening.

Instead of being an overt racist by screaming the N-word, they opt for Thug which is more palatable and acceptable in their eyes.

Black people are aware of this and are not fooled by switching the words. Racist are going to be racist no matter which interchangeable word they use.

I know I ruffled some feathers with my take on Marshawn’s Lynch’s refusal to be a professional and engage the media in my opinion piece “Marshawn Lynch Is Not A Black Media Hero“, but this is typical of racist white people who refuse to accept us no matter what we do.

I may not agree with how Lynch handles his job, he should be a professional, BUT THIS IS RIDICULOUS, YET TYPICAL!

We are not new to this country and understand how we are viewed by many in white society. And while these racist idiots don’t speak for all white people, we are aware there are enough of them out there for us to remain diligent, weary and alert.

SOUND OFF: What do you think of the racist social media response to Marshawn Lynch on social media?