Put Some Respect On Our Name: When Black Media Gets Out Of Pocket

As media outlets, we must understand the power that we wield. Social media allows us to have a voice and a platform to showcase voices that would usually be ignored. HBCU’s, especially those that aren’t a part of the Black College Ivy League squad (Morehouse, Spelman, North Carolina A & T, Howard, FAMU) are a perfect example of overlooked voices that are finally being displayed on a wide scale thanks to several valiant efforts by HBCU alumni, students and advocates. None of these platforms are more dedicated than HBCU Gameday. Created by Winston-Salem State University 2009 Alumnus Steven J. Gaither, the online media outlet is an outlet to display HBCU athletes from across the nation. The Gameday crew travels from game to game tirelessly filming recaps for the various SIAC, MEAC and CIAA games. Don’t get me wrong, their efforts are applauded. ESPN only shows us sometimes. Fox Sports barely sneezes in our direction. Aspire’s television schedule concerning HBCU’s is questionable at best. HBCU Gameday filled a well needed niche in the HBCU landscape. But, they crossed the line this past Saturday.

HBCU Gameday decided to take a break from being the black ESPN and act like a Fox News clone in their surprise attack on my HBCU Fort Valley State University in the wake of our 62-64 loss to the Clark-Atlanta Panthers in the SIAC basketball tournament. Clark-Atlanta won a hard fought game against our boys and played tremendously this year. There’s no doubt about that. It’s a shame that their win couldn’t be covered more by the aforementioned media outlet, as they were more concerned with arriently throwing a shot at Fort Valley and acting like we’re petulant children for being displeased with the narrative he painted for our institution. 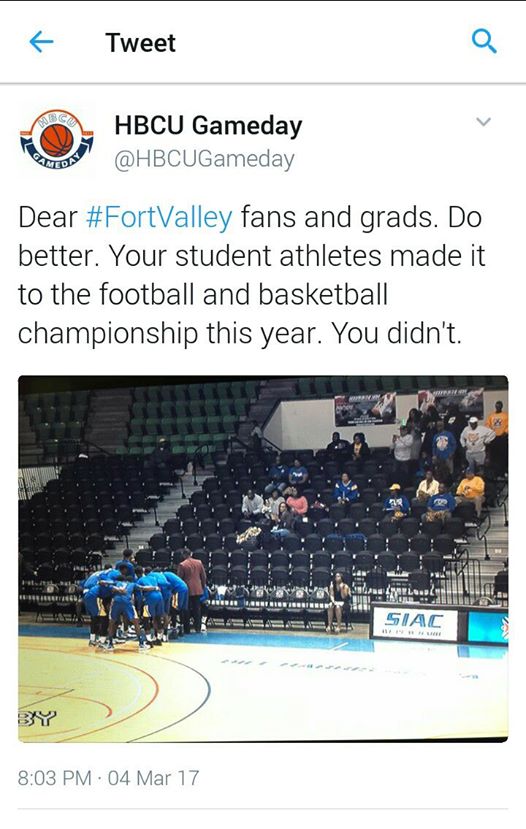 Moments before the game, HBCU Gameday tweeted a picture of the Fort Valley State University Wildcats basketball team in a huddle, with a fairly empty stadium section behind them. The caption insinuated that FVSU doesn’t support our student athletes and decided to neglect our boys as they went for history, as FVSU hadn’t won a SIAC Basketball championship since the late 1990’s. Students immediately rushed to the defense of our university, giving valid explanations concerning our absence. Our Spring Break starts this week (March 6-10) and we’re coming off of Midterms week. The SIAC Championship Tournament lasted for a week (February 27-March 4). Were students expected to forgo their studies to travel to Alabama for a week to see our basketball team play? Clearly Fort Valley is some type of NBA team! Nope, we don’t have anything more important to do with our days but run to Alabama out of nowhere. Let’s just forget the fact that our Residential Living office told us that we had to be moved out of our dorms for the Spring Break by Saturday at noon. Where there’s a will there’s a way right?

After heat from students, HBCU Gameday then tried to change the meaning their statement to be a shot at our Alumni. Yeah, that’s so much better! Let’s insult hard working adults that don’t have the ability to hop up and drive to Alabama at the drop of the hat for the SIAC tournament. According to HBCU Gameday you should forget your family! Nope, your careers aren’t important! Take a week long vacation and support your HBCU!

When we gave cases where we, both students and alumni, do support our sports programs we were diminished saying we only support rivalry games and homecoming. So, I guess the Classic isn’t on a Saturday where travel arrangements can be made? Same for Homecoming! I doubt if the Fountain City Classic was on a Tuesday night in Columbus you’d have 13,000 + people in the stadium. Oh, but the HBCU Gameday crew will be there though! And, since you aren’t, you’re a sorry alumni!

Dear HBCU Gameday: Let’s be clear, if you want to be taken seriously as a reputable media outlet you need to stop the errant shots at the HBCU’s that you pledge to help publicize. We don’t say anything about your unsanctioned use of our logo that I know you didn’t run through the FVSU Marketing and Communications office. Then, Food Lion is your sponsor? Are the HBCU’s that you’re covering getting a percentage of that check that you’re getting off the backs of our students? Where’s the scholarship that you’re creating from your sponsorship sir? It’s rather hypocritical that you attended nearly every Fort Valley State University basketball game and saw how packed that stadium was and even have video footage of how lively our students were in response to the success of our basketball team. So, I guess the Claffin game in January never happened?

We will not tolerate the disrespect of our institutions. We refuse to allow you to make Fort

Valley State University the display of the week. We have the capacity to respond. You wanted to write a blog on your website talking about how “ The tweet has apparently hurt a lot of feelings, had folks putting in overtime with their twitter fingers and pulling out capes in the name of Fort Valley State.” If appealing to your assault with logic is me capeing for FVSU, then I’m Luke Cage (black superhero, even though he doesn’t wear a cape). I wonder how you’d feel if someone just up and said something about WSSU? Would you still be singing the same chastising tune?

Let’s keep it real. You reached HBCU Gameday and we shut you down. Take this L and keep walking.