NEWS ONE: Sheri Crawley noticed a strong change in her daughter’s behavior as she entered kindergarten. Not only was Laila Crawley becoming more isolated at school, but she also began commenting that she wanted the same blond hair that her classmates had — Laila was also one of a few Black girls at her Michigan school. Realizing that Laila was struggling with her identity, Crawley and her husband, Corey, began thinking of ways to address the situation. 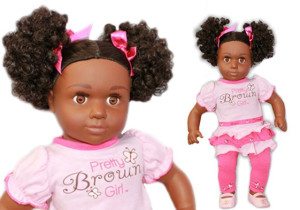 Around that time, Crawley noticed a CNN four-part series on the infamous 1940s Doll Test, which revealed that most children are biased against brown-skinned dolls when given a choice.

According to the Pretty Brown Girl website’s official mission statement:

Our mission is to encourage girls to celebrate the beautiful shades of brown skin all over the world while inspiring positive self-esteem and confidence. Our approach is to provide an engaging platform for the subtext that most girls of color live within throughout their lives. This subtext often effects their world view, careers, life choices, and relationships with others as they mature into adults.