Have you ever heard of MOVE? Led by John Africa the movement started in 1972 and was part of the wider Black Power movement. They demonstrated against racism, police brutality, animal rights and other issues. Living in a commune style and rejecting science, medicine, and technology and wanting to return to hunter-gatherer society.

There were many altercations that led up to a day in 1985 when the police literally bombed the home they lived in.

Neigbors had complained over the years of loud bullhorn-amplified profanity led demonstrations and they had many run ins with the police. However in 1978 during a shoot-out, an officer died by a bullet to the back of the neck. The MOVE members maintained he was facing the house at the time of the shooting.

The police ramped up their fight from then on in until a fateful day in 1985.

Wikipedia describes that day as followed:

1985 bombing
In 1981 MOVE relocated to a row house at 6221 Osage Avenue in the Cobbs Creek area of West Philadelphia. After the move, neighbors complained for years that MOVE members were broadcasting political messages by bullhorn. The bullhorn was broken and inoperable for the three weeks prior to the bombing of the row house.

The police obtained arrest warrants charging four occupants with crimes including parole violations, contempt of court, illegal possession of firearms, and making terrorist threats. Mayor W. Wilson Goode and police Commissioner Gregore J. Sambor classified MOVE as a terrorist organization. On Monday, May 13, 1985, the police, along with city manager Leo Brooks, arrived in force and attempted to clear the building and execute the arrest warrants.

This led to an armed standoff with police, who lobbed tear gas canisters at the building. The police said that MOVE members fired at them; a gunfight with semi-automatic and automatic firearms ensued. Commissioner Sambor ordered that the compound be bombed. From a Pennsylvania State Police helicopter, Philadelphia Police Department Lt. Frank Powell proceeded to drop two one-pound bombs (which the police referred to as “entry devices”) made of FBI-supplied water gel explosive, a dynamite substitute, targeting a fortified, bunker-like cubicle on the roof of the house.

The resulting explosions ignited a fire from fuel for a gasoline-powered generator in the rooftop bunker; it spread and eventually destroyed approximately 65 nearby houses. The firefighters, who had earlier deluge-hosed the MOVE members in a failed attempt to evict them from the building, stood by as the fire caused by the bomb engulfed the first house and spread to others, having been given orders to let the fire burn. Despite the earlier drenching of the building by firefighters, officials said they feared that MOVE would shoot at the firefighters. Eleven people (John Africa, five other adults, and five children aged 7 to 13) died in the resulting fire, and more than 250 people in the neighborhood were left homeless. Ramona Africa, one of the two survivors, said that police fired at those trying to escape.

Fallout
Mayor Goode appointed an investigative commission called the PSIC (aka MOVE Commission), chaired by William H. Brown, III. Police commissioner Sambor resigned in November 1985, reporting that he felt that he was being made a “surrogate” by Goode. Goode, on the other hand, feared the Philadelphia Police Department because he had received intelligence indicating that he had been marked as a target for death by the police department. The MOVE Commission issued its report on March 6, 1986. The report denounced the actions of the city government, stating that “Dropping a bomb on an occupied row house was unconscionable.” Following the release of the report, Goode made a formal public apology.[26] No one from the city government was criminally charged. The only surviving adult MOVE member, Ramona Africa, was charged and incarcerated for seven years on riot and conspiracy charges.

In 1996 a federal jury ordered the city to pay a US$ 1.5 million civil suit judgement to survivor Ramona Africa and relatives of two people killed in the bombing. The jury had found that the city used excessive force and violated the members’ constitutional protections against unreasonable search and seizure. Philadelphia was given the sobriquet “The City that Bombed Itself.”

Finally the crime (my opinion) has been recognised with a plaque. A historical marker has been unveiled during a ceremony last saturday at Osage Avenue and Cobbs Creek Parkway. This was where the Move activist community lived until they and their neighbors were bombed in 1985.

And here it is below: 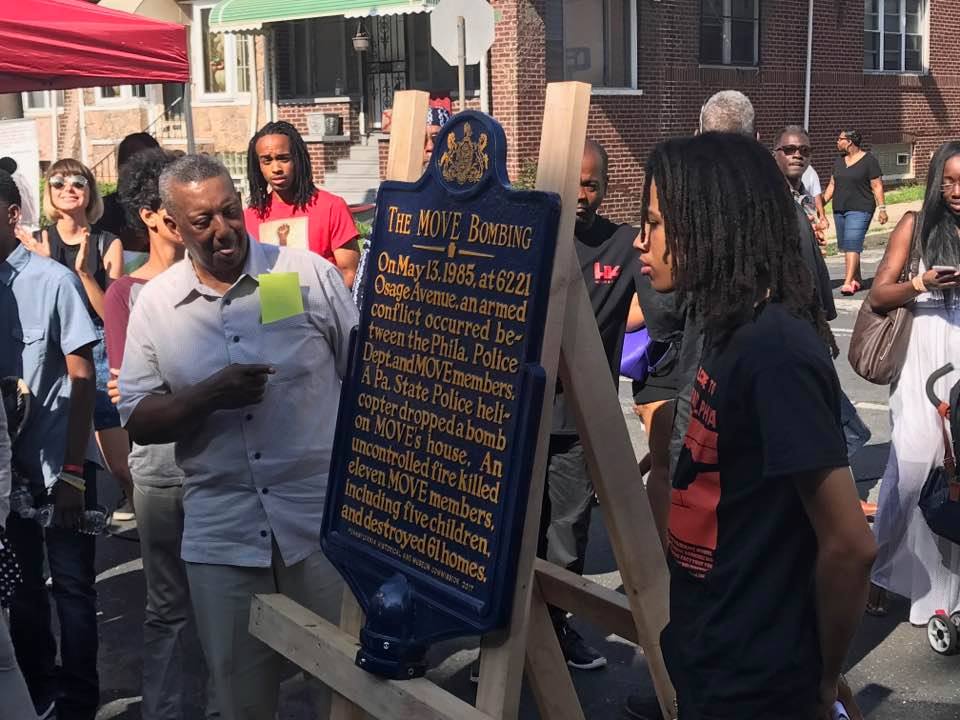