Patricia Bath – A Lady of Firsts

Patricia E. Bath, ophthalmologist, laser and creative research scientist, and supporter of visual deficiency counteractive action, treatment, and cure. Her achievements incorporate the innovation of a new gadget and procedure for cataract surgery procedure known as Laserphaco, the formation of another discipline known as “community ophthalmology.” She was the first woman member of the Jules Stein Eye Institute, the first woman to lead a post-graduate training program in ophthalmology and the first woman elected to the honorary staff of the UCLA Medical Center.  Bath was the first African American to serve as a resident in ophthalmology at New York Uiveristy and the first African American woman to serve on staff as a surgeon at the UCLA Medical Center.

Patricia E. Shower was born on November 4, 1942 in Harlem, New York. Shower’s dad, Rupert, was a Trinidadian immigrant and the first black motorman in the New York City metro subway system; her mom, Gladys, was a descendant of enslaved Africans and Cherokee Native Americans and was a homemaker when her children were young and later as housekeeper to save money to fund her children’s education.

Bath attended Julia Ward Howe Junior High School and Charles Evans Hughes High School. In 1959, Bath received a grant from the National Science Foundation to attend the Summer Institute in Biomedical Science at Yeshiva University in New York, where she worked on a project studying the relationship between cancer, nutrition, and stress. 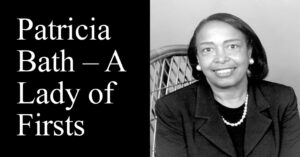 Bath went on to graduate from Hunter College in New York City with her B.S. degree in chemistry in 1964. She then attended Howard University Medical School. Bath graduated with honors in 1968 with her M.D. degree and won the Edwin J. Watson Prize for Outstanding Student in Ophthalmology and later accepted an internship at Harlem Hospital Center shortly afterward.

At the Harlem Hospital Center, Bath focused on finding treatments for blindness and visual impairment. In 1969, she and several other doctors performed the hospital’s first eye surgery. Bath used her personal experience as a medical professional to publish a paper demonstrating higher rates of blindness among African Americans.

Her observations led her to develop a new field of study known as “community ophthalmology;” it was based on her recognition that blindness was more common among under-served populations both in the United States and around the world. Bath has supported community health initiatives aimed at reducing blindness within these communities through preventative care and other measures.

In 1981, Bath conceived of her invention, the Laserphaco Probe and published numerous papers about her research and inventions. She traveled to Berlin University in Germany to learn more about laser technology, and over the course of the next five years, she developed and tested a model for a laser instrument that could be tested to remove cataracts.

Dr. Bath received a patent for her invention on May 17, 1988, and became the first African American female doctor to receive a patent for a medical invention. She continued to work at UCLA and Drew University during the development of her laser cataract removal instrument, and, in 1983, she developed and chaired an ophthalmology residency training program.

From 1983 to 1986, Bath was the first woman chair and first female program director of a postgraduate training program in the United States. In 1993, Bath retired from the UCLA Medical Center. Patricia Bath was inducted into the International Women in Medicine Hall of Fame in 2001.