What is Omega Psi Phi? 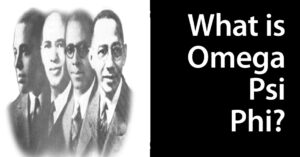 Omega Psi Phi is letters derived from the Greek alphabet (ΩΨΦ). The organization’s slogan is “friendship is essential to the soul”. Omega Psi Phi, like all Greek-lettered organization, is secretive about some of its traditions, while other it expresses freely. For example, members of the organization or known as “Omega Men” and others refer to the members as “Ques” or “Que Dogs”.

The purpose of Omega Psi Phi

Omega Psi Phi seeks to uphold the union of college men who share the ideals of scholarship and manhood. The organization’s objectives include enhancing the creativity of members, encouraging them to develop progressive ideas and reach their goals. Its members take important positions in the community’s political life. Benjamin Lawson Hooks is an example of a member who embodies this ideal. Hooks was an American civil rights activist and served as the executive director of the National Association for the Advancement of Colored People (NAACP).

Its chapters are located in different schools and it teaches members to always stand with the downtrodden persons in society. Omega Psi Phi seeks to make all its members useful in civil and political segments.

The organization has been around for over 100 years and continues to thrive because of the principles it operates on. Omega Psi Phi runs on four pillars: perseverance, scholarship, manhood, and uplift. The group is part of an organization of nine African-American sororities and fraternities called the National Pan-Hellenic Council (NPHC). The other word also commonly used to refer to this group is the “Divine Nine”. The NPHC was formed on May 10, 1930, and it calls upon members to participate in cooperative initiatives and programs globally.

• James Mercer Langston Hughes – Famous American playwright, novelist, poet and a civil rights activist. He is one of the pioneers of the jazz-a new literary art form.

• Michael Jeffrey Jordan – Commonly referred to as MJ. Jordan is a former professional basketball player and is widely regarded as the best NBA player of all time. Jordan is the chairman and owner of the Charlotte Hornets NBA basketball team.

• Earl Gilbert Graves Sr – He was an American advocate representing the interests of the African- American businesses. Graves was also an accomplished businessman, publisher, and a philanthropist.