Many people think all professional athletes are disconnected from the struggles of the black community, but this simply isn’t true. And this past sporting weekend, one player reminded us of this very fact and was attacked for merely asking for justice.

Andrew Hawkins of the Cleveland Browns dawned a black shirt during warm ups before their football game on Sunday that read, “Justice for Tamir Rice and John Crawford.” 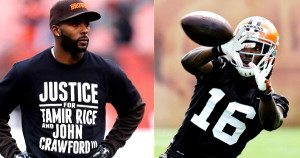 Rice and Crawford were both brutally gunned down by police officers responding to calls there were black people being black in areas they were not suppose to do suck. I’m being sarcastic, but both were shot and killed without warning by responding police officers and it appears they will not be charged for their deaths.

Hawkins says he was raised to always respect law enforcement and officers doing the right thing will not be offended by his calls for justice.

Here is Andrew Hawkins in response:

SOUND OFF: What do you think of Hawkins wearing the shirt? And the Police Union’s response?

We use information collected through cookies and similar technologies to improve your experience on our site, analyze how you use it, and for marketing purposes.
NFL Cleveland Browns Player Demands Justice for Tamir Rice & John Crawford, Killed By the Police