Why You Never Heard of Noble Drew Ali and His Push to Instil Pride in the Africans in America and Beyond?

Noble Drew Ali, born as Timothy Drew, came into this world on January 8, 1886, in the state of North Carolina. Many of his followers believe that he was the orphaned son of two ex-slaves who was raised by the Cherokee. However, others feel that his father was a man by the name of John A. Drew, a political and military leader for the Cherokee tribe. While the facts about his early life are not certain, we do know that he grew up to become one of the most successful religious leaders in United States history.

During his travels as a merchant seaman, Ali met an Egyptian magic priest and started to receive spiritual training. The priest not only trained Ali into mysticism but also gave him a lost part of the Quran, which is now known as the Holy Koran of the Moorish Science Temple of America. When Ali came back to the United States, he decided to leave his merchant seaman occupation and put his spiritual training and beliefs to use. He opened the Canaanite Temple in Newark in 1913. Unfortunately, Ali angered some of the residents with his views on race, so he left that area and moved on to other areas of the east coast. Many of Ali’s followers came with him on his journey with some settling in Philadelphia, Washington, D.C., and Detroit, where they opened congregations.

During the 1920s, the religious movement spread into the Midwest as the temples came to be called the Moorish Holy Temple of Science. Ali used this movement to install his racial beliefs into people that they should be proud of the African race, their culture, and where they came from. In 1925, Ali planted himself in Chicago, Illinois, where he began to preach on the streets. Soon, huge crows stopped to list to Ali’s words of how the people of North America need to let go of their hate towards those of the African race.

In 1928, The Moorish Science Temple of America, Inc. was officially established. Many people feel that Ali changed the name of the temple so many times because he felt the name needed to be changed as the organization grew and beliefs evolved. As with the new name came new laws and charter, which were to be followed. However, the mission generally stayed the same no matter what the organization was called. The mission was to change the negative thoughts and feelings that humanity had against each other. The organization stated this would be possible through teaching people how to act as better human beings. 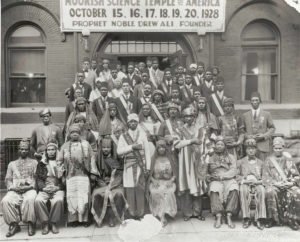 The Moorish Science Temple of America movement is still alive and well today. In fact, the members of the congregations, which are settled throughout the United States, still teach what Ali preached for decades.

Ali passed away on July 20, 1929, at the age of 43 in his Chicago residence. While his death certificate stated that he died from pneumonia, not everyone is convinced. Many of his followers then and now believe that he died due to injuries he received while he was in jail on suspicion of murder. While the charges were dropped, Ali died shortly after his release, with members of his congregation stating that he laid his head on a fellow member and passed out and that he was not ill when he died. His congregation made sure Ali received a beautiful service in Chicago with hundreds of people in attendance.