The National Society of Black Engineers (NSBE) was founded by Edward Barnette and Fred Cooper in 1975 at Purdue University. Barnette (now deceased) became NSBE’s first president with Arthur J. Bond, Ph.D., a black faculty member, as BSE’s advisor. The group started as the Black Society of Engineers (BSE). In addition to Barnette, Cooper, and Bond, six other young African Americans actively participated in the founding of NSBE. They were Anthony Harris, Stanley L. Kirtley, Edward A. Coleman, George A. Smith, John W. Logan Jr., and Brian Harris. Under Anthony Harris’ leadership, the organization was renamed to the Society of Black Engineers (SBC). The group’s success made created the opportunity for its replication in other accredited engineering programs in various colleges and universities across the country. As a result, the first national meeting was held on April 10-12, 1975 at Purdue. At the historic first national meeting, NSBE was formed and elected John Carson as its first national president. NSBE’s national headquarters are in Alexandria, VA. 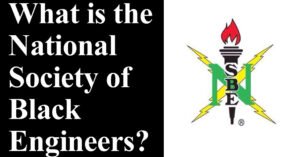 Why It Was Founded?

NSBE was formed when two undergraduate students: Edward Barnette and Fred Cooper saw the need to improve black engineering students’ recruitment and retention rate. This is because at that time, more than 80% of African American students were dropping out of Purdue University’s engineering program. The purpose of NSBE’s formation included supporting African American engineering students emotionally and academically. This was aimed at the retention of black students in the engineering degree courses. As a direct result of NSBE’s efforts retention rates have markedly improved throughout the country.

Engineering is important among the Science, Technology, Engineering, and Mathematics (STEM) fields because, in the US, economic growth largely depends on STEM. However, ethnic minorities and women are still largely underrepresented in these fields.

Why It Still Exists

NSBE enjoys support from sponsorships with major corporations such as Boeing and General Motors, whose leaders have been on NSBE’s Board of Corporate Affiliates since 1975. Boeing sponsored the Boeing Flights competition in March 2019 at the NSBE National Convention.

The state of Texas incorporated the National Society of Black Engineers as a 501 (c) (3) nonprofit organization in 1976, and being a tax-exempt association, with a membership of more than 29,900, it is among the largest student-governed organizations countrywide. Its accomplishments for Black engineering students are unmatched by any other association.

Its collegiate membership has increased to more than 17,000, and more than 13,000 people attend NSBE’s annual conventions. NSBE has several active chapters types that targeting different groups in the country and abroad, including:

Pre-Collegiate: This initiative targets high school students to encourage them to consider studying an engineering course when they join college.

Collegiate: This consists of chapters in the country and abroad. The college chapter links the new engineers with professionals.