What is National Association for the Advancement of Colored People (NAACP)?

The NAACP or National Association for the Advancement of Colored People was established in 1909 and is America’s oldest and largest civil rights organization formed in New York by a group of interracial activists. One of the reasons for the NAACP’s creation was in response to the unlawful violence experienced by African Americans around the nation. NAACP has been an advocate for justice for many years and have been a notable supporter of campaigns such as anti-lynching, equal rights, voting rights movements among others. The organization was also highly active during the civil rights movement being responsible for countless victories in support of African Americans.

Some founding members of the NAACP were white individuals, better known as “white progressives”. Some of these white progressive founders were Mary White Ovington, Henry Moskowitz, and Oswald Garrison Villard. Some widely known African American founders were W.E.B. Du Bois and Ida B. Wells. Since the NAACP’s early days, it has been working towards its mission through peaceful protests, lobbying, and the working to reform the judicial system. A notable example are the anti-lynching campaigns in 1919. NAACP peacefully protested lynching and other violence against blacks by way of silent marching. Thousands of people participated, and this was one of the first mass movements in America in support of ending racial violence. Their efforts led to the eventual decline of lynching as they helped spread public awareness on the issue. The organization received some criticism for its strategy of working through the judicial system and lawmakers to achieve its goals, rather than focusing on more direct methods of protest favored by other national civil rights groups. 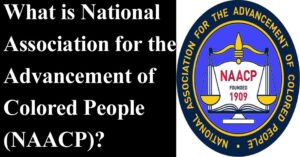 During the Civil Rights era, the organization played a substantial role in bringing justice to the black population as they won quite a few key victories. A tremendous victory was the successful argument against the 1954 decision in the landmark Brown vs. Board of Education case that outlawed segregation in public schools. In addition, the NAACP sought justice regarding voting rights and discriminatory housing practices. They also won these cases. Furthermore, one of the biggest civil rights rallies in American history, was the 1963 “March on Washington”, in part organized by NAACP. During that event, a staggering amount of 200,000 people peacefully gathered at the Lincoln Memorial demanding equal justice for all citizens. It was at that event Martin Luther King Jr. gave his famous quote “I Have a Dream”speech which emphasized his belief that one day everyone, regardless of race, will be brothers.

As of 2017, the organization has over 2000 branches and more than half a million members worldwide. Barack Obama, when he was elected President, spoke at the NAACP’s 100th anniversary as his election was an indication of how far American society had come as a people in the fight for equality. The organization is currently focused on issues such as job inequality, education, health care, and the criminal justice system, as well as protecting voting rights. The group has also pushed for the removal of Confederate flags and statues from public property.