NAACP President To Step Down

After five years with the organization, Benjamin Jealous says he wants to spend more time with his family.

NAACP President and CEO Benjamin Jealous, who is credited with helping to stabilize the nation’s largest civil rights organization, including by boosting its finances, plans to step down at the end of the year, saying he wants to pursue teaching at a university and would like to spend time with his young family. 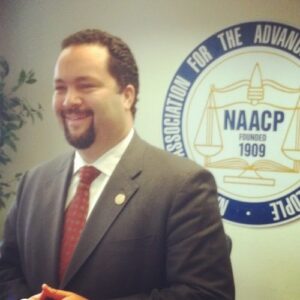 Jealous plans to step down on Dec. 31. His departure plans were first reported by USA Today.

Jealous told the newspaper he also plans to start a political action committee to raise money to elect diverse progressive candidates to public office, though not necessarily only Democrats.

The Baltimore-based NAACP said that its rosters of online activists and donors have grown tremendously during his five-year tenure. Jealous, now 40, was the group’s youngest-ever leader when he was hired as its president at age 35 in 2008.

During President Barack Obama’s first campaign, Jealous said he teamed with others to create a fundraising group that raised $10 million to help elect the first black president.

Jealous is also credited with improving the NAACP’s donor base over the past five years. The group said its donors have increased from 16,000 people giving each year to more than 132,000 under his leadership.

During Jealous’s tenure, the NAACP also has embraced gay rights in a historic vote to endorse same-sex marriage in May 2012. “Civil marriage is a civil right and a matter of civil law,” the group said, citing the 14th Amendment’s equal protection clause.

Jealous told The Associated Press recently that a broader coalition is needed to fight the civil rights battles of the 21st century.

“Last century we needed lawyers; this century we need big, broad coalitions,” he said. “When extremists decide to attack all our communities, they must hope that there will be infighting. But we have stood all for one and one for all. That is how we will win.”

The Rev. Joseph Lowery, a civil rights leader and former president of the Southern Christian Leadership Conference, said Jealous brought an intellectual quality and a level of integrity that won respect.

“I’m sorry to see him resign, although I understand he has other plans. But, I think he was just getting into his stride,” Lowery said Sunday evening. “I think he brought a luster to the office that was quiet and dignified and effective, and I wish him well in his new work.”

“Not only was he able to revive the NAACP and raise its budget to higher heights, he joined us in the streets in real civil rights activity on the ground,” Sharpton said in a written statement. “From the ‘suites to the streets,’ he will be missed as head of the NAACP, but I am sure he will not leave us in his contribution to the struggle.”
Jealous began his career as a community organizer in Harlem with the NAACP Legal Defense Fund. He was suspended from Columbia University in New York City after organizing student protests and went on to work as a reporter for the Jackson Advocate newspaper in Mississippi.

Jealous has led the NAACP to advocate against “stop-and-frisk” police tactics and stand-your-ground laws following the death of Florida teenager Trayvon Martin. He has also fought to abolish the death penalty at the state level, including in Maryland.

NAACP Chairman Roslyn Brock accepted Jealous’ resignation in the past week. She said the group would continue its fight to restore part of the Voting Rights Act that was recently struck down by the Supreme Court, as well as work to boost its civic engagement efforts and ensure that black Americans are able to obtain health insurance under the nation’s health care overhaul.

Brock thanked Jealous for his service.

“Under his leadership, the NAACP has built a highly competent staff that will carry our mission forward and meet the civil rights challenges of the 21st century,” she said. “Our board, staff and volunteer leaders throughout the country deeply appreciate his sacrifice and will continue to implement our game-changing goals for the next half century.”