WHERE IS THE MEDIA? 10 Black and Latinx Kids Have Gone Missing In 10 Days In D.C.

Black and Latinx teens have been going missing quickly and in high amounts and the mainstream media seem to be dedicating very little time to talking about it.

First off, a series of tweets from @BlackMarvelGirl brought to light eight black teen girls who have gone missing in D.C. in the past week alone. Luckily that is spreading via twitter (find the tweet at the end of this article, please help spread them).

Then, the Root, one of the larger publications to take up the cause, reported that in the past 10 days alone, 10 young people of color have been reported missing in D.C.

The D.C. police dept have been tweeting and local news has been trying but this needs to go far and wide and get the whole country opening it’s eyes to find out what is going on. 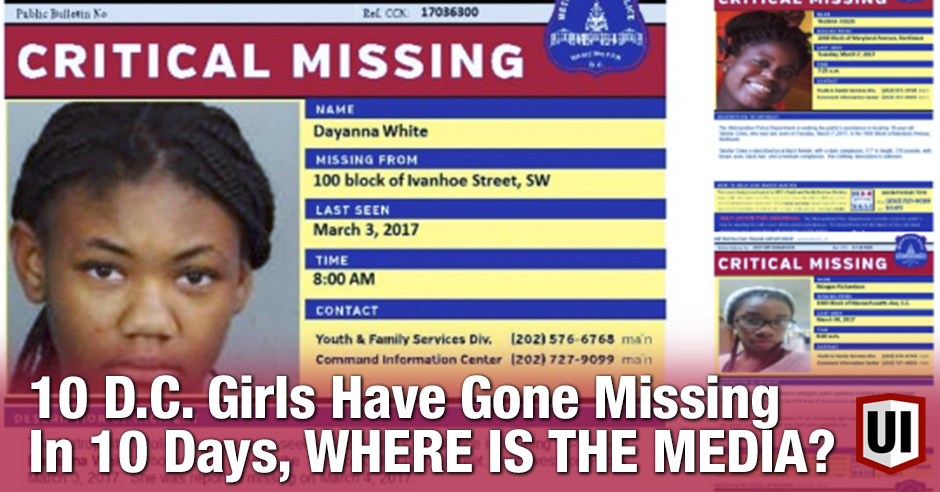 Why aren’t larger outlets talking about these teenagers as well as this pattern? Yesha Callahan of The Root asks how often cases like this are given the spotlight in comparison with cases featuring young, attractive white women. This phenomenon, first called “missing white woman syndrome” by PBS reporter Gwen Ifill, occurs when the mainstream media gives more attention and preference to covering the cases of young, white, and attractive women from middle-class or upper-class upbringings rather than people of color or others who don’t fit that criteria. Well-known cases of nearly nonstop coverage include Natalee Holloway, who disappeared on a trip to Aruba in 2005 following her high school graduation, and Elizabeth Smart, who was kidnapped as a teenager in 2002 before being rescued nine months later.

If you have information on the missing teenagers, call the Washington, D.C., Police Department at (202) 727-9099. You can also check out Black & Missing Foundation, which seeks to offer more visibility for black people reported missing in the U.S.

It takes 3.2 secs to retweet and help find these 8 BLACK GIRLS reported missing in Washington, D.C. during the past three days (1/2) pic.twitter.com/xpEwNcW44S