Marie Van Brittan Brown and her significant other, Albert, made an early closed-circuit TV framework to be utilized for home monitoring. That security system was the pioneer of all advanced home security technology used today.

Brown was born in Queens, New York, on October 22, 1922, and lived there until her passing on February 2, 1999, at age 76. Her dad was born in Massachusetts and her mom was from Pennsylvania.

The patent for her closed-circuit creation was issued in 1966. Her invention later strongly influenced the creation of the current home security systems that we use today. Brown’s creation was propelled by the security hazard that her home faced in the area where she lived. Marie Brown was a medical nurse and her better half, Albert Brown, functioned as an electrical technician. 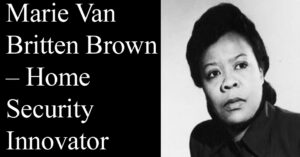 Their work hours were not the normal 9-5, and the crime rate in their Queens, New York City neighborhood was extremely high. This meant that in the event of an emergency, the police response time was slow. Brown acted accordingly and searched for approaches to ensure her safety and the safety of her home. She set out to create a system that would enable her to identify who was at her home and contact the relevant authorities as fast as could be expected under the circumstances.

Brown envisioned a progression of three to four peepholes at different vantage points; where a camera would slide over these peepholes to survey the outside territory. A radio-controlled remote system would transfer the picture to a screen, or set of screens, situated elsewhere in the house. On the screen, the inhabitant could not only observe the person who was at the door but could also talk with that individual via two-way microphones. A remote control option enabled her to bolt or open the door from a safe or convenient distance.

The Browns’ invention was pure innovation, drawing on existing closed-circuit TV technology that was in already in use in the military for observation. A German engineer by the name of Walter Burch had created camera-monitoring systems in 1942 to enable him to watch Nazi V-2 rocket testing from a secure position.

In an interview with the New York Times, Brown pointed out that with the licensed system, ” a lady alone could set off an alert quickly only by the touch of a button, or if it were introduced in a doctor’;s office, it may prevent robberies or holdups by drug addicts.”

The article noted that the Browns did not yet have a manufacturer for the framework but rather they planned to install one in their own home, and afterward would attempt to intrigue, other home developers.

Sadly, the media stories about the Browns ended after the patent endorsement was declared in 1969. Even though there is proof that the Browns did not seek business opportunities, their creation inspired numerous variants of home security systems in use today, in single-family homes, condo structures, and independent enterprises.

Beyond the simple alarm system, camera-based security systems help with everything from personal safety to improved mail delivery. By 2013, more than a dozen inventors had cited the Brown patent for their own gadgets. Brown later received an honorary award from the National Scientists Committee.