Behind every success story, you will find a path of hardships, perseverance and a commitment to succeeding against the odds. This is the story of Darnell Ferguson.

Too often people believe success is something that happens to the few, the lucky, the priviledge who have overnight success. However, this couldn’t be further from the truth. In fact, most success stories are tattered with disappointment, failure and constant let downs, but the person rises to the occassion in the end to be successful. 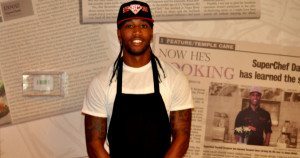 Darnell Ferguson struggled throughout high school. He wasn’t a great student. But his life prospect changed when he switched high schools and enrolled in a vocational school for culinary arts. He discovered he had a talent.

That was also at the time when Emeril [TV celebrity chef] was huge and I liked what he was doing, so that was one thing that really caught my eye… I liked the uniforms, the professionalism, I liked everything that wasn’t like what I was used to.” – Darnell Ferguson

After graduation, he went to Sulliavan University in Louisville KY to further his pursuit of being a chef, but was met with disappointment as he discovered his academic funding wasn’t full, but only partial. Very disappointment, he considered dropping out but continued taking a few classes and selling drugs on the side to make ends meet.

He was lucky enough to graduate, but didn’t stop selling drugs and was eventually caught and locked up. He lost everything being arrested 8 times in three months and got evicted.

“The last time getting locked up, I remembered being in class and them talking about being a statistic and how once you get in the system you can’t get out… I started thinking that now I’m the guy that I didn’t want to be…

That’s when I told myself that I was going to get serious about something I know that I can do, which is cooking…” – Darnell Ferguson

After even more hardship, set backs, low paying jobs, but remaining true to getting away from illegal activity and focusing on becoming a chef, he found God in his life. His anger problems and began to dry up and opportunity was just around the corner.

Ferguson got his break when he ran into an old resturant acquaintance who had a lunch and dinner menu. He offered him an opportunity to provide breakfast through his restaurant if he “rented” the space. This concept is called a “Pop up” business in the restuarnt industry.

Ferguson took to this concept like a fish in water and blossomed.

As an avid comic book and cartoon fan, the Super Chefs popped into his mind and a business was born.

Today, Ferguson has a partner, but also 4 Pop Up locations and three standing resturants. The first of which opened July 9th, 2015.

“Our food can sometimes seem ‘high end’ based our plating. I wanted to tie in a fun creative food theme and provide a place where people can come in for lunch and dinner without getting dressed up… Make it kid friendly without making it look like a toy store.” – Darnell Ferguson

Hats off to this young man for persevering through his bad decisions, anger issues and finding the guideance he needed to stay legal and turn his life around. It isn’t easy going from drug dealer to homeless to entrepreneur, but clearly it is possible.

Darnell Ferguson did it….and we are proud of him for it. Hats off to this young man!

What do you think of Ferguson’s amazing story?

We use information collected through cookies and similar technologies to improve your experience on our site, analyze how you use it, and for marketing purposes.
Louisville Man Goes From College, Selling Drugs, Being Homeless To Owning Three Restaurants