The legendary, troubled Lauryn Hill, 37, has penned an open letter to fans speaking about her recent tax troubles and confirming that we can expect new music from her, something that has been highly anticipated for years.

Ever since the release of 1998′s The Miseducation of Lauryn Hill, fans have been longing for more life lessons from Hill. The album sold over 19 million copies worldwide and won the former Fugees front-woman five Grammy awards. Since that time, Hill has taken time off to give birth to 5 more children and her music has arguably been hit or miss. 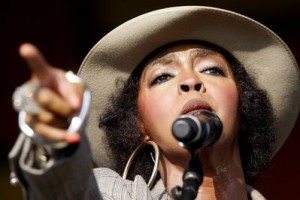 Read some of her letter below:

It has been reported that I signed a new record deal, and that I did this to pay taxes. Yes, I have recently entered into an agreement with Sony Worldwide Entertainment, to launch a new label, on which my new music will be released. And yes, I am working on new music.

I’ve remained silent, after an extensive healing process. This has been a 10+ year battle, for a long time played out behind closed doors, but now in front of the public eye. This is an old conflict between art and commerce… free minds, and minds that are perhaps overly tethered to structure. This is about inequity, and the resulting disenfranchisement caused by it. I’ve been fighting for existential and economic freedom, which means the freedom to create and live without someone threatening, controlling, and/or manipulating the art and the artist, by tying the purse strings.

Only a completely complicated set of traps, manipulations, and inequitable business arrangements could put someone who has accomplished the things that I have, financially in need of anything. I am one artist who finds value in openly discussing the dynamics within this industry that force artists to compromise or distort themselves and what they do, rather than allowing them to make the music that people need. There are volumes that could (and will) be said.

Read the full letter on her Tumblr page.

As previously reported by NewsOne, Hill is being sued for non-payment of rent on a South Orange, N.J., home that she’s been living in for the last three years.  The owner of the property filed a legal ultimatum demanding that Hill either pay up or get out. When she failed to pay, proceedings were initiated to remove her from the property.

Hill, who faces possible jail time after being convicted on tax evasion charges, was supposed to be sentenced on April 22, but the trial date was delayed.