Who on earth is Black Pete? Many traditions are rooted in a not so nice past but one tradition of the holidays in Holland is so clearly racist that it’s a wonder that it’s allowed to be celebrated on such a wide scale.

Every year Saint Nicholas arrives to Holland from Spain on a steamboat. Along with him he has his friend “Black Pete”. Pete is wearing full blackface with red lips an curry hair. He accompanies Saint Nicholas and gives out candy and presents to children. At the end of the holiday Pete and Saint Nicholas get back on that boat and head back to Spain. Black Pete and variations of him can also be found in some surrounding countries.

Black Petes can be seen up and down the country over the holiday period. His face adorns christmas memorabilia, Pete arrives to Christmas parties, people make Black Pete cakes. Pete is loved by children.

Black Pete’s early roots show that he was represented as a personal slave to Saint Nicholas in the mid 17th Century (first appearing in illustrations in 1850). While I would say it’s obviously not wrong for Saint Nicholas to have a black friend the use of the obvious blackface and the obvious historic undertones is totally offensive and it’s amazes me that in Europe this has not been rejected.

As recent as the 70s Pete wasn’t represented so nicely. He was a character of fear carrying a broom and a bag to bag up bad children and take them to Spain. Rhymes about black pete say things like ‘relax, my child, I’m a good friend, even though I’m black as soot, my intentions are well’, seriously “EVEN THOUGH!!!!”.

The justification of Pete lays largely in tradition, or that he is a positive character that kids love. Some attempts to justify Pete come in strange ways from saying he is just Saint Nicholas’s friend, he is covered in soot from coming down the Chimney and is not black (why the red lips and clean clothes then?). Some people say Pete is Moor and is just a harmless characterization! 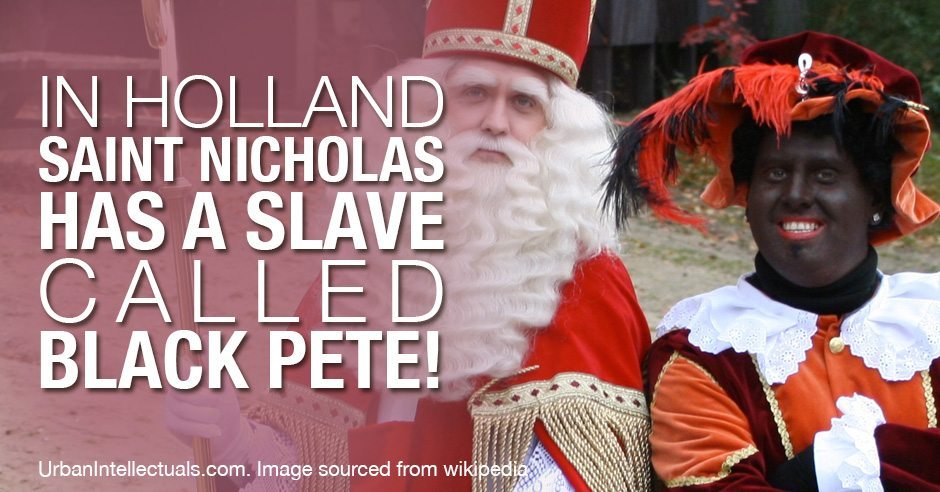 The people Holland needs to remember their past and huge involvement slavery and not try to whitewash a harsh history. Some people try to link Pete’s history to early medieval representations of Saint Nicholas taming a black devil, if this is the case then why is he now dressed in racist blackface, known to be offensive.

There are recent counter movements and protests against Pete and momentum and discussion is growing that may lead to his popularity dwindling. The sooner the better as far as I am concerned!

Do you think the Dutch should be allowed to keep this tradition?

1 thought on “Did You Know In Holland Saint Nicholas Has a Slave Called Black Pete!”