Jesse Jackson Jr. Plea Deal Could Be Filed As Soon As Friday

Formal charges against Jesse Jackson Jr. could be filed as soon as Friday and Tuesday at the latest. His plea has also implicated his wife, leading to tax fraud charges against her.

The filing at the U.S District Courthouse in Washington will not require a court appearance by either Jackson. Plea agreements will be submitted to the court clerk and assigned to judges, who will set initial court dates.

As CBS 2 Chief Correspondent Jay Levine reported last week, Jesse Jackson Jr. will plead guilty to one felony count of misuse of campaign funds and then let a federal judge determine his punishment, which according to the agreement could range from probation to five year in prison. 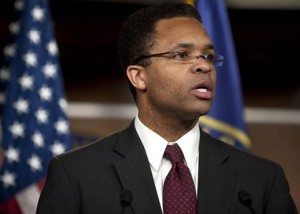 Jackson’s deal calls for him to repay hundreds of thousands of dollars spent for things like travel and meals with a mistress and a $40,000 men’s Rolex watch he bought for himself. Jackson’s resignation from Congress was also part of the deal.

But Jackson’s pleading guilty to using campaign funds for personal expenses could expose Sandi, his campaign manager, to tax-fraud charges.

Sandi Jackson is expected to accept responsibility for some things because, as the congressman’s campaign manager, she signed the tax returns.

Both Jacksons could face penalties ranging from probation to jail time.

But it’s hard to believe that, with two young children at home, both would be sent to prison.