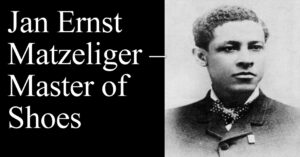 Interesting fact: He was born in the colony of Dutch Guiana.

Jan Ernst Matzeliger was born on September 15, 1852 to Ernst Matzeliger and her mother, who was a house slave. His father was a third generation Dutchman and the mother was of African descent. At 10, Jan entered a Colonial Ship Works in Paramaribo where he first showed great interest in machinery and mechanics. At the age of 19, he became one of the workers in the Dutch East Indies merchant ship. He would stay there for several years before relocating to Philadelphia, Pennsylvania, where he gained shoe trade skills.

Matzeliger experienced difficulties finding a job because in 1873 black youths were subjected to extreme prejudice and institutional segregation. In 1876, he moved to Lynn, Massachusetts, where he later set up his shoe-making industry. However, before that, he worked at the Harney Brothers Shoes Factory.

Jan at first perfected his skills in cordwaining-a shoemaking process where the show makers use their hands to mold and create shoes for customers that fit. It was through this process he began to think about ways to expedite the process. Jan knew that sewing and tacking the soles were the two major obstacles in shoe making. He set out to
discover a way to automate the process. Initially, he experimented with several designs in a bid to discover what worked best where and when.

Matzeliger came up with several prototypes before eventually patenting his “lasting machine”. He made it using elastic, wire, and cigar boxes. Jan obtained patent no. 274, 207 for the “Lasting Machine” on March 20th, 1983.

Matzeliger was perplexed with how fast his lasting machine was accepted and the way it speeded up the shoe making process. Many businesses started embracing the technology and later on he would receive more patents to enhance the machine further. Jan’s innovation speeded up the process of stitching the sole and the leather. The new and simple
automation process made it possible to manufacture up to 700 pairs in one day. Later, his innovation
would result in the recognition of Lynn as the “shoe capital of the world”.

Matzeliger worked so hard with little rest that he developed a cold, which developed into tuberculosis. He spent sleepless nights figuring out ways to improve his project and that weakened him a great deal. On August 24th, 1889, the inventor succumbed to tuberculosis at the age of 36. Jan received a good send off from the U.S Government which issued “Black Heritage” postage stamps in remembrance of his works and contributions in 1991.