New York has a reputation for being a melting pot, but it also has a strong history of slave trading. For her photo series, White Shoes, artist Nona Faustine wanted to call attention to that history and its enduring legacy.

“As a time traveler I’m very invested in the past and our future. I see myself, the people who built this city and country as one. They deserve so much recognition for their sacrifice and contributions, something that is still being denied them. There was a force deep inside of me that needed to pay homage to those who played a pivotal role in the early history of this city, and the spaces in which they existed. I wanted to uncover those places where a tangible link to the past exists. Being a documentarian at heart I wanted you to feel and see those spaces, let your mind wonder. What does a Black body look like today in the place where they sold human beings 250 years ago? No other medium but photography and film could do that. “ 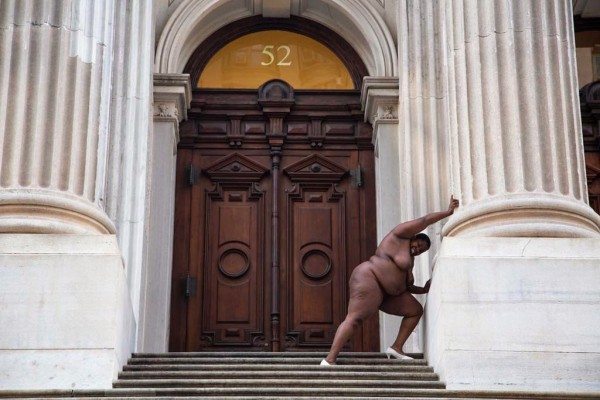 Although American slavery is often painted as a Southern legacy, it was an integral part of the culture and economy of Northern states also, including New York;

“Slavery was introduced to Manhattan (then New Amsterdam) in 1626 and, for two centuries, remained a significant part of New York life. In fact, the New York City Common Council declared Wall Street the city’s first official slave market on December 13, 1711, deeming it a space where human beings could be enslaved for the day or for the week. The slave market took the shape of a wooden structure with open sides, and held approximately 50 people at a time. It operated as such, on the corner of Wall Street and Pearl Street in the heart of the Financial District, until 1762. Slavery was legally abolished in New York in 1827.”

The use of women’s bodies for sociopolitical reasons is still very controversial, particularly for black women. Black woman protesters recently marched topless during San Francisco rush hour to draw attention to police brutality against black women, a move that drew both admiration and criticism. 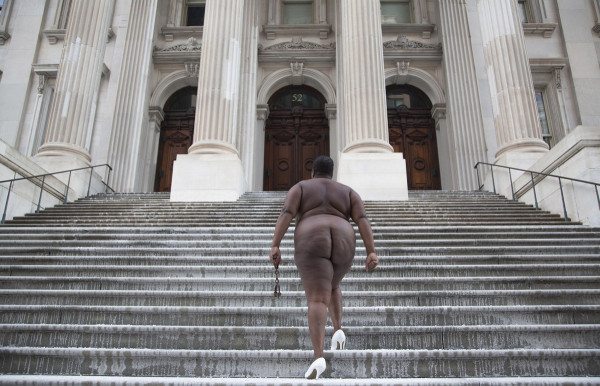 As for Faustine, shedding her clothes publicly was both exhilerating and challenging;

“My eyes are wide open, and still I’m there and not there. My body is pumping with adrenaline. My anxiety is extremely high. During all that, you filter out as much abstractions as possible so that you can maintain some sort of composure for the camera as people, cars and buses go by. My senses are elevated. Sounds in particular I hone into. I have this feeling of being watched, by something or someone not actually there at times. I’m extremely aware of my presence in these places.”

As for the white shoes in Faustine’s photography, they represent “the white patriarchy that we cannot escape.” 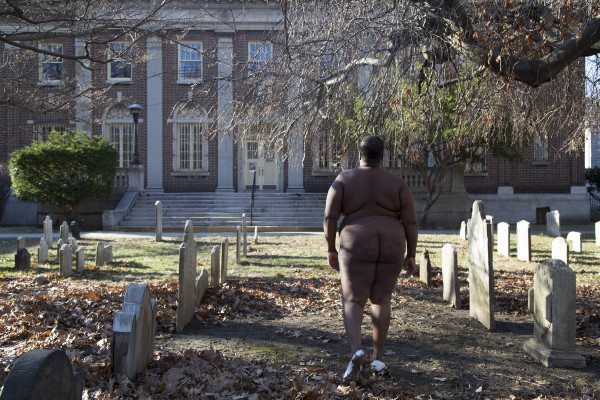