He may not be the first black President, but 20 year old Jewell Jones has taken his first step to being a political force in the State of Michigan. The college student has picked up a job for the people while he works on his education.

Jewell Jones made political history in the City of Inkster, Michigan last week by becoming the youngest elected city councilman in the city’s history. In a time when young people are said to have zero political interest, Jones and his peers are proving across the country this tied mantra doesn’t apply to their generation. 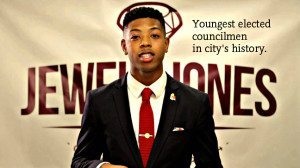 Councilman Jones is currently a full-time student at the University of Michigan at Dearborn, so his schedule is going to be packed. The lifelong resident of Inkster discusses there being no politicians in his family, but he has always been active in the community and sees politics in his future….a bright future, I might add.

At UM-Dearborn, Jones is pursuing a double major in political science and finance, a serious combination and plans to graduate the spring of 2017…even though he has been elected. This pace will keep him busy, but he seems to be up for the challenge.

From the Michigan Journal: His on campus affiliations include the Army Reserve Officers’ Training Corps (ROTC), the Black Student Union (BSU), and the Student Veteran Association (SVA).

“Sometimes it’s a little difficult to balance school and the campaign,” Jones said, “but I just take it each day at a time and figure out how to get the most out of my time.”

In the past two years he has been a staff member on campaigns for Sen. David Knezek and Inkster Mayor Hilliard Hampton.

“I was at different political conventions, including a conference in Washington D.C., and they were discussing being more active in your community,” Jones said. “So when the election rolled around and the seat was open, I figured this is the right thing to do.”

Definitely, Jewell Jones, it was the right thing to do. Now you have an opportunity to be the change you want to see in the world.
I grew up in Inkster, Michigan (Brick City, born and raised), and am very familiar with the plight and struggle of the people as they look for a solid education, employment and safety for their children, but am very optimistic the youth have the solutions the city needs to move forward, but the elders must move to a supporting role and give them a chance to bring change.

Urban Intellectuals salute Jewell Jones on your accomplishment and wish you nothing but the best in your fight for the people, your education and your bright political future.

SOUND OFF: What do you think of this outstanding young man?