There is no doubt as to why people from across the globe wish to migrate to America. It is
portrayed as the place one goes to start a new life, acquire wealth, and live the ‘American
Dream’. The living conditions in America, compared to one’s motherland may be completely different. Therefore, it may require time to acclimate themselves to the culture. Migrating to the US is very common amongst Caribbean people since there are many cultural ties and due to the proximity, and Haiti is no exception.

Haiti has had a difficult history both economically and as a result of catastrophic natural
disasters. So, for many Haitians seeking to find more opportunities abroad the United States is an appealing option. Over the last five decades a good number of Haitians have immigrated to the U.S. One such natural disaster was the earthquake in 2010 that claimed millions of lives and the destruction of many properties and the country’s infrastructure. As a result of this, there were a recorded 676,000 immigrants in the US in 2015. Major urban centers such as New York, Miami, Boston, and Orlando are home to most of the Haitian diaspora. During the migration, many skilled laborers leave Haiti which unfortunately results in a “brain drain” effect for the country.

No matter how far the Haitians are from their home country, the diaspora always finds a way to stay deeply connected with their roots and they never forget where they come from. Family and friends stay true to their culture through music, food, and language. The Haitian diaspora community also have many restaurants, clubs, and stores that are deeply rooted in Haitian culture and caters mostly to the Haitian diaspora. Furthermore, the Haitian diaspora has organized countless associations in the U.S., comprising of student and professional organizations charitable causes for Haiti, cultural and artistic groups and political cliques. These groups focus primarily on matters associated with Haiti which are a notable way of helping the country by providing exposure to the problems that the country has. Although there is a growing number of organizations that focus on issues relating to their own Haitian constituencies in America, tragic circumstances in Haiti seem to always reorient diaspora activities back to Haiti. 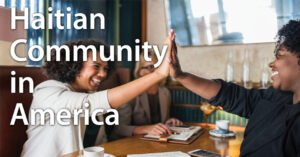 Even though there is undoubtedly constant support for Haiti, the charity events and other voluntary organizations aren’t necessarily done on a large scale. There is a constant need for financial support and awareness, thankfully, it is still available to an extent. Also, Haitian diaspora businesses tend to operate on a smaller scale compared to their competitors, and they mostly rely on personal relationships to stay profitable. This is another opportunity where the Haitian diaspora can keep in touch with their fellow countrymen and their culture.

The Haitian diaspora who have made a home in the US, over the span of a few decades, and who are contributing to its economy continues to grow. Despite their need to leave their country, they never forget their culture and like many global diaspora communities living in the U.S. they send remittances and other things back home to better support friends and loved ones in Haiti. They show their love to their fellow Haitians through their events, charities, organizations, food establishments and music.