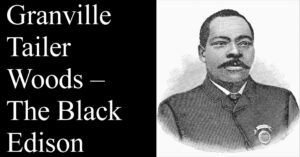 He attended school in Columbus but dropped out later at age 10 due to his family’s economic circumstances. His family was so poor that at the age of 10 he went to work and became an apprentice in a machine shop, learning to be a blacksmith and a machinist. He gained practical knowledge from his work and by voraciously reading at
night.

While working, he noted that he needed more education to help him develop his skills to
further enhance his creativity. Some years later, he studied mechanical and electrical
engineering at an eastern college between 1876 and 1878.

• He developed many inventions for the railroad industry; he invented 15 electric railway appliances and received about 60 patents.
• His most notable invention was the Multiplex Telegraph, which brought about safer transportation because it conveyed messages between trains and train stations, hence preventing collisions.
• He also invented the Tunnel Construction to improve the electric railroad system.
• In 1885, he invented a device that he named “telegraphony” which combined the telegraph and the telephone.
• In 1888, he devised a railroad’s system of overhead electric conducting lines.
• Other notable inventions include a galvanic battery in 1888, an automatic air brake in 1902, electric motor’s regulator in 1896, an automatic electric currents’ safety cut-out in 1889, an egg incubator in 1900 and several others.
• After receiving his Multiplex Telegraph patent, he started his own company, Wood Electric Co., in Cincinnati. His inventions earned him the nickname, “The Black Edison”.

While still in his teenage years, he held various positions such as engineer on a British ship. He also worked in a railroad machine shop, a steel mill and as a railroad worker. In 1872, he worked in Danville and Southern railroad, Missouri, as a fireman. It was here where Woods became an engineer and took a part-time course in electronics. In 1874, he worked at the Springfield Iron Works in Springfield, Illinois. In 1878, he was employed on the British Steamer “Ironsides” and became its chief engineer.

Eventually, Woods settled in Cincinnati, Ohio after much travel and experience. He dedicated his time to modernizing the railroad system and its equipment in his company before moving the company to New York City. Over the years Woods sold many of his devices to various companies including General Electric and American Bell Telephone Company.