Remember the man shot and killed inside of the Walmart in Ohio while resting on a toy gun, John Crawford? His girlfriend was killed in a fatal car crash on new year’s day.

Tasha Thomas, age 26, and Frederick Baily of Dayton, age 30, both died in the crash. It happened around 3pm, new year’s day. Thomas was getting a ride from Baily to her car when the accident occurred.

911 dispatchers started to receive calls stating a car had run into a pole and overturned from bystanders and neighbors in the area. The accident was reported to be really bad, according to witness. 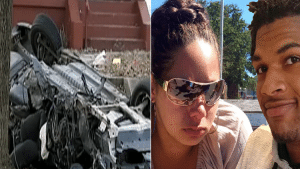 “It just sounded like a big bang and just a ton of metal just tumbling down the street,” said a witness, “When I looked out I saw two bodies lying and I really didn’t want to see no more.”

Both passengers were ejected from the car crash. When officers and paramedics arrived on the scene, Tasha was still alive and everything was done to try and keep her alive, but she succumbs to her injuries later at the hospital.

Police said the driver was doing between 90 and 100 mph when the car hit the pole and started flipping. The car flipped several times before landing at a stop with the wheels pointing up in the air. It seems the entire driver’s side was ripped from the car on the impact of the pole.

Internet rumors and speculation are running wild since this is the girlfriend of the man police killed in a Beaver Creek Walmart in Ohio. This is same girlfriend who spoke out about police brutality in Ohio and around the country.

There is speculation that she was murdered by someone cutting the break cords on the car, but none of these claims have been substantiated.