George Washington Carver was a prominent African American scientist and inventor. Born into slavery in the year 1864, in addition to becoming an inventor, he was also a botanist as well as a teacher at the Tuskegee Institute. At a young age, Carver took a keen interest in plants and experimented with natural pesticides, fungicides and soil conditioners. This undeniable interest led him to be known as the “the plant doctor” to local farmers due to his ability to discern how to improve the health of their gardens, fields, and orchards. 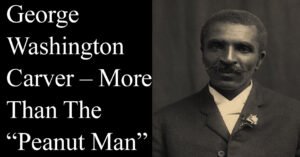 Carver had several notable accomplishments in the laboratory and taught many poor farmers that they could feed hogs acorns instead of commercial feed and enrich croplands with swamp muck instead of fertilizers. However, this was just the beginning of his accolades as through his experiments with soil chemistry, Carver learned that years of growing cotton had depleted the necessary nutrients from the soil, resulting in low yields. But by growing nitrogen-fixing plants like peanuts, soybeans and sweet potatoes, the soil could be restored, allowing yield to increase dramatically when the land is reverted to growing cotton, a few years later.

Carver eventually became known as the “Peanut Man” for his work on plants led him to focus on further developments for different uses of crops. These crops include peanuts, sweet potatoes, soybeans, and pecans. In all, he developed more than 300 food, industrial and commercial products from peanuts, includes milk, Worcestershire sauce, plastics, paints, dyes, cosmetics, medicinal oils, soap, ink, wood stains. He also experimented with peanut- based medicines, such as antiseptics, laxatives, and goiter medications. In the mid-1930s when the polio virus was wreaking havoc on the United States, Carver was convinced that peanut oil could be helpful in treating the virus. Although it hasn’t been proven that the oil helps, there is no doubt that it contains therapeutic components. In addition to this, he created an impressive total of 118 products from sweet potatoes such as molasses, postage stamp glue, flour, vinegar, synthetic rubber and even a type of gasoline.

Carver, in 1921, tried to gain tariff protection for the peanut industry after speaking with the US House of Representatives. This effort was done in hopes of showing the world that there are various types of products that can be derived from peanut. His speech ultimately swayed the representatives which led the peanut industry to have tariff protection. Carver was not just concerned about peanuts but the technique of crop rotation as well. High yields of cotton would be ascertained by farmers using Carver’s rotation method, but his biggest accomplishments will always come from peanuts. Despite their small size, peanuts boast massive benefits.

George Washington Carver has become a symbol of the transformative potential of education, even for those born into the most unfortunate and difficult circumstances. He has also displayed spectacular accomplishments as he is one of many black individuals who has time and time again proved that their voice is just as important as any other individual. George Washington Carver died in January 1943, at the Tuskegee Institute.